The night I was a ghost – a true story

I am now a legend of terror, a whispered story that will be told over and over in bars or around the dinner table. I am talking about myself now, David Stewart. This is a true story, after all.

It all started because my wife wanted to see a ghost. I’d like to see one too, if they exist, which I’m not entirely sure of. I have an open mind though. In any case, when I heard about a real haunted house on the east coast of Korea, my wife and I rented a car and drove four hours across the country to the rural area of Youngdeok, right on the coast of the East Sea (or Sea of Japan. I don’t want to get involved in that controversy). 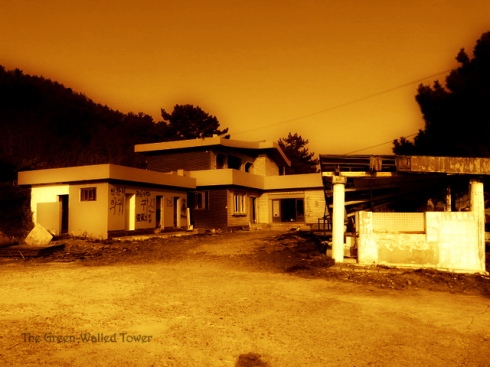 I had seen another video about people who had gone to explore the house, but they had gone during the day. Bah! We like to go at night. Actually, we meant to arrive around sunset, but it does get dark earlier these days and it was pitch black by the time we arrived.

The last abandoned house we explored was out in the middle of nowhere but this one was right next to a vacation condo on a busy highway. We walked up the road on the condo side and set off two geese and a dog who were standing guard. A man came out and we thought he was going to yell at us, but instead he just told us to go up the other side. 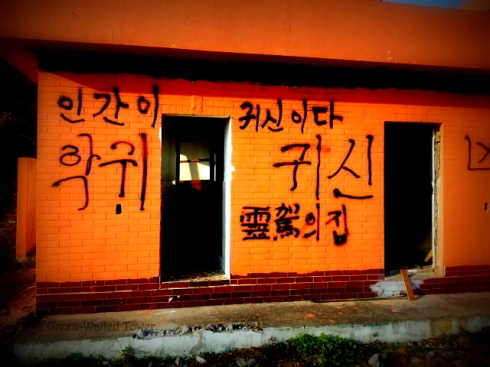 The graffiti says variants of “ghosts” and “evil spirits”

The house, being famous, was quite vandalized, with graffiti all over it and broken windows. But it was also nice and creepy. We were looking for the basement, especially, since that was supposedly where people had heard ghostly voices. While we were looking around, a car stopped at the bottom of the hill. At first, we thought they had seen our flashlights and were coming to yell at us, but we quickly realized they were just there to see the house too.

Suddenly, we were in the position of being in a haunted house at night with other people coming to see it. What would you have done? Well, what we did was stand without moving in the front room with our hoods up and wait for them to come. Honestly, I had no idea how they would react. They walked up, shined the flashlight in and…

…screamed like banshees. They kept screaming and ran all the way down the hill to their car and drove away while my wife and I laughed and laughed. I would have explained and apologized but they never came back. Oops. So, that is why there is now even more anecdotal evidence that this house is haunted. However, if you hear any Koreans tell about how they saw a ghost in the window of the Youngdeok house, feel free to explain (or not). 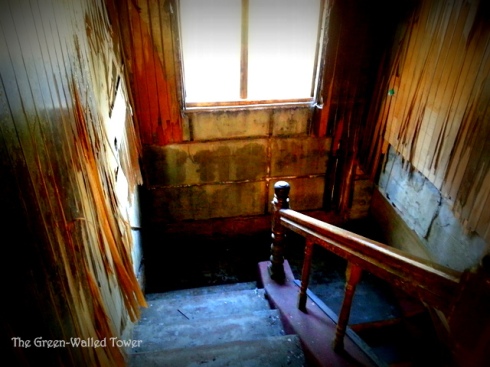 By the way, we finally did find our way down to the basement but we never heard any voices. And we still haven’t seen a ghost. Yet.

Here is the video of our explorations. Go to 3:21 to see the part where the other people come.

I am a writer of anything quirky and weird. I love most genres of fiction and in each there are stories that I would consider "my kind of story". END_OF_DOCUMENT_TOKEN_TO_BE_REPLACED
This entry was posted on Tuesday, November 26th, 2013 at 4:03 pm and tagged with adventure, creepy, Creepy Korea, Ghost, Haunted house, Korea, night, Tales from the Tower, Youngdeok, Youtube and posted in Korea. You can follow any responses to this entry through the RSS 2.0 feed.
« The Poisoned Child
5200 Words – Friday Fictioneers »