The Secret Lives of Strangers 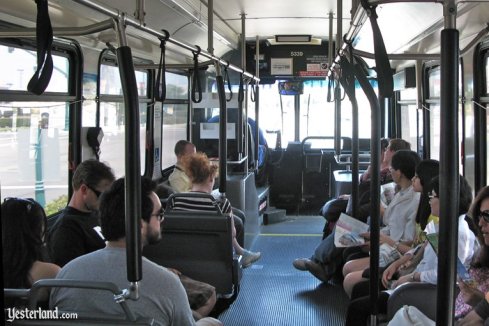 “Do you think that strangers are strange? There’s no way to really know. One of the things I love about strangers is that you can’t really know anything about them. Get to know them, you say? Then they’re not strangers, are they?” Francis said all this while gesticulating somewhat ferociously at the woman sitting next to him on the bus.

“I’m sorry, I don’t know you,” the woman said. She got up and stood by the door.

“That’s my point, exactly,” Francis called after her. “I could be anyone: a movie star, or even an axe murderer.” From the looks he was getting, the passengers on the bus considered the latter to be vastly more likely.

But Francis was no axe murder; he just liked to watch people and he felt that he had a gift for telling things about people, just by looking at them.

A man got on the bus. He wore a faded leather jacket and a baseball cap that said “USS Missouri”.

Francis sized him up. A former sailor? No, it was too obvious. This man was a pirate. He used to be a consultant for the Somali pirates and retired here to live with his harem of semi-legal Chinese immigrant wives. He takes the bus because he always carries a pistol and his road rage is constantly teetering on the edge of erupting, Vesuvius-style.

The man put a hand into the pocket of his jacket and gave Francis a meaningful look. Francis looked away quickly.

A woman got on at the next stop. She was a gorgeous brunette and wore short shorts and pink midriff top.

A former model, Francis thought immediately. She made millions on the runway, but retired after becoming disillusioned with the lifestyle. She rides the bus because she’s looking for a normal guy to settle down with: someone slightly overweight and wearing a clever T-shirt.

The woman walked by Francis without even reading his clever T-shirt. Well, it doesn’t always work, he thought.

An elderly woman climbed laboriously onto the bus. She didn’t interest Francis much, but he was fascinated by the small poodle she held in her arms.

That dog has rabies, Francis thought. It’s taken some medicine for it, so it’s okay now, but any sudden movement and it will Hulk out and start attacking everyone. Even a sneeze will set it off. Francis shifted to the middle of the seat to try to keep the woman and her dangerous poodle from sitting next to him.

The next person to get on was a girl in her twenties. She wore glasses and carried a thick stack of books with titles like Molecular Geometry. She sat down next to Francis.

What if she’s a terrorist? Francis thought with a chill. What if those books are loaded with explosives and she’s just gotten out a terrorist cell meeting and now she’s on a mission? She probably worships Egyptian deities and has dedicated her life to avenging them for being forgotten by humans. The woman opened the top book and began reading about obtuse angles in sodium hydroxide.

Francis looked out the window to find some more strangers to daydream about. The bus was four stops from his house when suddenly the girl next to him jumped up and pulled an Uzi out of a hollowed-out Metaphysical Economics book.

“Everybody down!” she screamed. “We’re taking this bus to Mexico. Stay down, or by Anubis, I will shoot you like a jackal.”

“Oh no, we’re not,” the man in the brown, leather jacket roared. “I have to get home to my wives.”

He jumped up and pulled a gun out of his pocket, but in the process, jostled the elderly woman with the poodle. The poodle let out a howl and jumped to the floor. It started frothing at the mouth and running around, peeing on everything and trying to bite people’s ankles.

Francis tried to make himself smaller as he looked out the window. I have a terrible, terrible gift, he thought.

I am a writer of anything quirky and weird. I love most genres of fiction and in each there are stories that I would consider "my kind of story". END_OF_DOCUMENT_TOKEN_TO_BE_REPLACED
This entry was posted on Friday, August 3rd, 2012 at 12:40 pm and tagged with bus, fiction, funny, quirky and posted in Light. You can follow any responses to this entry through the RSS 2.0 feed.
« Travelers Beware
The Thing in the Mausoleum »

12 responses to “The Secret Lives of Strangers”