If you read my blog regularly, you know that I tend to write a wide variety of stories with many different characters. However, if you were really paying attention, you know that a few characters have come up more than once.

The first of these is Klista. She first appeared in the story See the World Through a Cardboard Tube! and then recently in The Recruitment of Bruce Riansson.

Klista is a mysterious character. She is a woman who apparently has no trouble traveling between worlds or even quickly in space. Where she comes from is unknown. She often wears a red cloak and carries a bag of strange, possibly magical, items. As for what she does, she tells Bruce Riansson to “think of me as a type of guide. I show secrets to people who need them and who are worthy.” What this actually means, will be explored in later stories.

Joining her is Bruce Riansson, a former innkeeper who was exiled from his home country of Indrake for harboring a fleeing traitor. Because The Recruitment of Bruce Riansson occurred first, Bruce is actually the unnamed male assistant in See the World Through a Cardboard Tube!

The second recurring character is Horus Vere. He was the main character in The Mermaid’s Kiss and I Was on Trial Once… He come from the same world as Bruce Riansson and is a professional traveler, who seeks adventure and whatever profit he can make along the way.

A third character who will become a recurring character is Edward “The Squid” Morrison, who appeared in the recent story Saturday, 4am. He is an extortionist and scavenger in post-apocalyptic England who is out to find what he calls “hidden pearls” of the old world, the time Before. He is accompanied by his recently-acquired android follower, Droog.

I will still write unrelated stories, but I will write more stories to expand these three story arcs. Let me know if there is one character whose stories you particularly enjoy and I will try to do more with them. 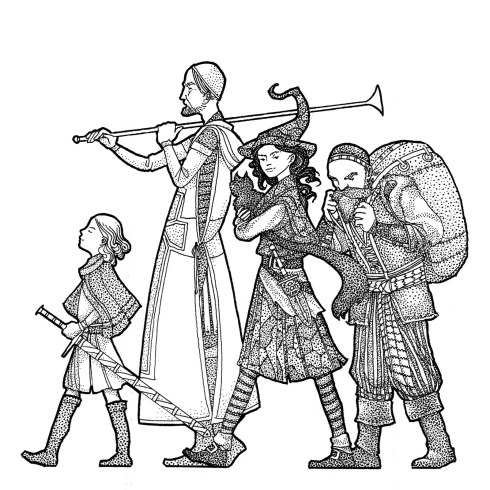 I am a writer of anything quirky and weird. I love most genres of fiction and in each there are stories that I would consider "my kind of story". END_OF_DOCUMENT_TOKEN_TO_BE_REPLACED
This entry was posted on Saturday, September 22nd, 2012 at 9:10 pm and tagged with Edward Morrison, fantasy, fiction, Horus Vere, Klista, outside the tower, science fiction, writing and posted in Uncategorized. You can follow any responses to this entry through the RSS 2.0 feed.
« Saturday, 4am
Isabelle’s Island »

7 responses to “Let the Cast Assemble”