The Other Side: Isabelle’s Story (Part 1)

(This story was written as the companion and sequel to one of my previous stories, Isabelle’s Island. However, this one turned out to be much longer, so I had to break it into four parts, which I will be posting over the next four days.)

Isabelle Stapleton hated the ship that had been the home of her and her family for the last four months. Life was hard and tedious and she was the only female on board besides her mother.

She would not have cared except for the crew. They were rough and uncouth and her skin crawled at the way they leered at her when she walked past on deck. She was never allowed outside of their cabin without her father or one of her two older brothers, David and Humphrey, there to guide her. Her mother never said why this had to be, only that it was not fit for a fourteen-year-old girl to be seen alone in public. This had been in the case in their home in England, but Isabelle could guess the reason as the looks from the crew became more open and obscene the longer they were at sea.

Each day followed the same routine. Get up to a breakfast of hard bread and tea, tidy up their small cabin and then do arithmetic, French and Latin lessons until lunch. More lessons in the afternoon and then supper and bed as soon as it was dark.

Life was stifling and isolated, but even within the walls of the tiny cabin and on her briefs visit to the deck, Isabelle could tell something was changing. The crew was angry. There were shouts and sounds of arguments. More crew members were flogged on deck for small infractions. Isabelle was always bustled inside during these punishments, but Humphrey would come later and describe them to her, how the sailor had cried out and how the man later had to scrub the blood of his punishment from the deck.

Then came the night when Isabelle and her family were awakened by gunshots. Her father barred the door while more shots were fired and people pounded on the door. Isabelle hid under the covers with her head pressed into her mother’s lap.

The door opened and then closed. “They’re going to let us go,” her father said. “Gather up everything you can carry. Come on, we cannot count on this rabble staying civil for long.”

“Up, Isabelle!” her mother said. They rushed around, gathering clothes into trunks, until her father said they could only bring one trunk. A minute later and David opened the door and they filed out onto the deck.

It was a chilling sight. They walked out into a circle of torchlight. The whole crew was there, surrounding them. Their looks were terrible. The leers and lascivious winks were now replaced with open lust and Isabelle almost expected them to all rush down on her at once.

But none of them moved. Isabelle and her family were instructed to climb down over the railing into a small boat below. There were already two men in it: the captain and the first mate. Both had been shot and the captain was not moving. Once they were all in, the ladder was pulled up and they were set adrift.

Isabelle dozed, but woke up in the middle of the night to hear her parents speaking softly.

“It had nothing to do with us, Mary,” her father was saying. “The captain was a cruel despot. We were just caught in the middle. They wanted Isabelle, and you too, but the second mate would not let them. Let us thank God for that.”

“What will we do now though?” her mother asked, her voice on the edge of panic. “We are set adrift with no food or water. They may as well have shot us and gotten it over with quickly.”

“God will provide,” her father said.

The captain died during the night. Isabelle’s father said a short prayer over him just as the eastern horizon was lightening and then they consigned his body to the ocean’s care. As his body sank into the depths, Isabelle looked up and saw land rising just above the waves on the eastern horizon.

That day was the hardest of Isabelle’s life. The sun was hot and there was no food or water for the six of them in the small boat. The first mate had been shot in the leg but was still able to row. He and Isabelle’s father and brothers took turns rowing towards the low island that refused to grow any bigger all through the long, torturous day. Finally, after the sun had gone down and the black sky was crowded with stars, Isabelle felt the boat’s keel grate on stones and she knew they had made it.

“We must thank God for this miracle,” her father said the next day as they surveyed the island that had become their new home. “We set out from England to find new places and share God’s word with unreached people and we can do that here just as easily as Tahiti or Fiji. We can a make a life here for ourselves.”

David and Humphrey helped their father build a lean-to while Isabelle and her mother collected fruit and firewood. They camped that night on the beach and the first mate entertained them with tales and myths from the sea. For the first time since they left England, Isabelle felt happy. 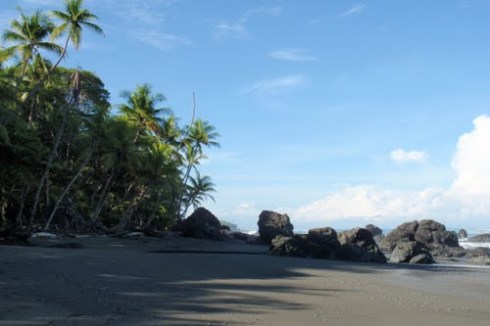 I am a writer of anything quirky and weird. I love most genres of fiction and in each there are stories that I would consider "my kind of story". END_OF_DOCUMENT_TOKEN_TO_BE_REPLACED
This entry was posted on Thursday, October 4th, 2012 at 12:12 am and tagged with fantasy, fiction, ghosts, historical, Isabelle, island, mutiny, ship and posted in Dusk. You can follow any responses to this entry through the RSS 2.0 feed.
« The Taxi Driver
The Other Side: Isabelle’s Story (Part 2) »

7 responses to “The Other Side: Isabelle’s Story (Part 1)”