Outside the Gates of Cambridge, Part 1

Read the previous story, The Road to Cambridge, or the ones that came before. 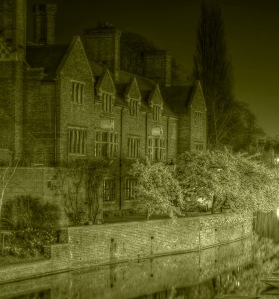 Cambridge was a gulag of order, where only the richest could afford imprisonment. It stood like a candle in the ravening darkness, the afterglow of a civilization long swept away. And just like a candle, it drew the hopeful, the lost, the destitute masses to its light until it was surrounded and inundated by more souls than its walls and barricades could ever contain. Still, the people came, encircling the enclave with ghettos where people scrabbled for entry and for the means to survive.

This was the crowded, tangled scene that Edward Morrison encountered as he reached the Silver Street Bridge gate and was denied entry into Cambridge. The guards saw his tattered clothes and dismissed him summarily. Cambridge was full. Droog started to go through the gate on his own and would have gotten his circuits smashed out, if Edward hadn’t intervened at the last second.

He had been walking for three nights along the M11, carrying the little boy he called Sean in his arms or on his back. The boy had woken up long enough to eat a little and drink water, but he never said a word, even when Edward asked his name and where he was from. Edward gave him what food he could spare, but saved most for himself, so that he would have the strength to keep walking. After the first night on the M11, he avoided other people, instead finding protected hollows to shelter in.

“Please, can I get a place to stay for the day,” Edward asked a woman at a cottage nearby. Dawn was near—already the eastern sky was lightening with omens of the sun’s approaching wrath.

“You got any food?” the woman asked, looking at Edward disdainfully. “Don’t bother offering the kid—we don’t eat ownflesh here.”

Edward soon found that everyone wanted food; even technology was worth almost nothing. He saw someone trade an e-device for a small meal of shrunken vegetables. He felt unarmed and alone. In Free Frall, he had been the king, with anything he wanted at his fingertips for barter, extortion or theft. But here, everyone was smarter and more ruthless than he had ever been. He had nothing left to trade, no threats to use, and dawn was coming.

He went back to the gate. The guards were already locking the gate and moving the day barriers in place on the near side of the bridge.
“Please, I’m friends with a citizen of the town. His name is Blake. He traded me this robot.”

The guard looked unimpressed. “Blake who? If he’s expecting you, then he should be here to vouch for you. If not, you don’t have a chance of getting in.”

A man had been watching them from a canopy on the side of the road and now he approached Edward. “Do you need a place for the day? It won’t cost you no food, and I can give you a bit too, for you and your boy. You look strong—just work for me during the nights and you can stay as long as you like.”

On the surface, the man’s expression was caring and sincere, but Edward could see the greedy look in his eyes. Swindler, he thought.

“What kind of work?” Edward asked.

“Search and salvage,” the man said. Theft and digging, Edward thought, if he was lucky.

“I’ll try it one night. What about the boy? He’s not mine. Can you give him a home?”

The man shook his head. “He’s too small to do work. Get rid of him now, if you want. If you bring him, my girl’ll take care of him while you’re out working, but his food comes out of yours.”

The man grinned and stuck out his hand. “Hinsen,” he said.

The cottage Hinsen led them to was tiny and already held eight people, but it had thick walls and kept out the sun. Two women were serving out thin soup when they got there. Edward got half rations since, as Hinsen explained, he hadn’t done any work yet. Then they all lay in rows on the dusty floor and went to sleep. Droog stood in a corner near Sean, watching over him.

Edward had trouble sleeping. Mosquitoes and burn flies came up through the floorboards and through chinks in the walls, buzzing around and biting. The air was stifling and smelled like filthy people and excrement. He wondered if he had done the right thing. He had abandoned Free Frall and his life there because of a song that had captivated his imagination, but now he was hungry, out of his depth, and sharing a filthy hut with nine other people, with prospects of doing manual labor to earn his keep. He considered leaving everything and fleeing back to Free Frall. 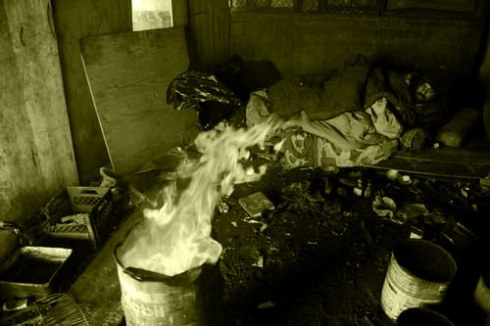 Outside, the sun climbed higher in the sky and before it reached its zenith over the blighted world below, Edward had slipped into a troubled and fitful sleep.

(to be concluded tomorrow)

I am a writer of anything quirky and weird. I love most genres of fiction and in each there are stories that I would consider "my kind of story". END_OF_DOCUMENT_TOKEN_TO_BE_REPLACED
This entry was posted on Monday, October 29th, 2012 at 11:14 pm and tagged with Cambridge, Edward Morrison, fiction, journey, post apocalyptic, road, robot, science fiction, Sean, travel and posted in Aftermath. You can follow any responses to this entry through the RSS 2.0 feed.
« Visual Fiction – Mountain Valley Map
Next Post »

8 responses to “Outside the Gates of Cambridge, Part 1”