Keeping on Nano-ing Along

Well, I’m not dead yet. It’s going really well, actually. Nano, that is. I just passed 30,000 words today and although I’m not entirely sure how everything is going to turn out at the end, the story shows promise, especially for a second draft.

In the spirit of my Monday post on first lines in literature, here is a first line from my Nano novel. It’s not the first line of my novel, but instead it is the first line of a 19th century novel that the characters find that sheds some light on their particular situation. I’m not saying it is a particularly good first sentence, since it’s not necessarily supposed to be, but it is what it is.

“In that long forgotten corner of Byzantium, where once was known and forgotten much of the lore of elder days, stood the great pile of stone, grey and rough-hewn, and in front of it the man himself, the wizard, the sorcerer of living flesh who struck and molded that mind of slave imprisoned, keeping it alive for all his dire purpose.” Heinrich Finster, Travels by Darklight.

This is my seventh year doing Nano and over the years I’ve developed various traditions surrounding it. I usually work in coffee shops, since I work better there than at home, and since it’s the season for mandarin oranges in Korea, I usually eat a lot of those while I’m writing. Here is a picture of one of my favorite coffee shops near our house. 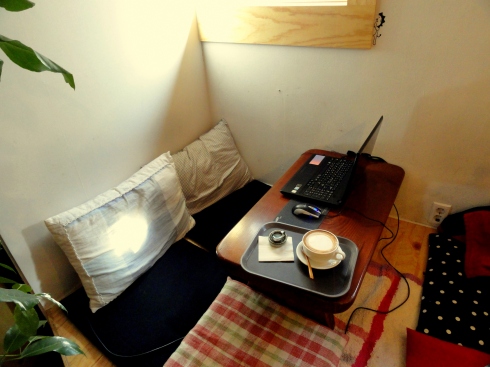 I like this coffee shop since it’s the only one I know of that lets you sit at low tables on the floor. It’s a very cozy place to work. I also now have an official Nanowrimo mug, if I want a lot of coffee, that is. It holds 500 ml of coffee. I made it myself (mostly). When I drink from it, it makes me feel like a Viking warrior and the word “quaff” comes to mind. 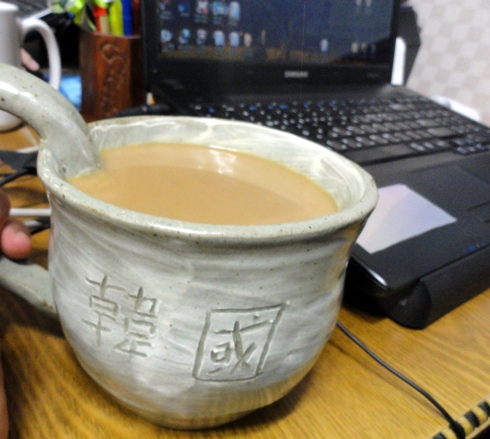 Do you have any special things you do when you write? Do you always write in the same place? Let me know in the comments.

I am a writer of anything quirky and weird. I love most genres of fiction and in each there are stories that I would consider "my kind of story". END_OF_DOCUMENT_TOKEN_TO_BE_REPLACED
This entry was posted on Thursday, November 15th, 2012 at 8:25 pm and tagged with coffee, coffee shop, nanowrimo, writing and posted in Uncategorized. You can follow any responses to this entry through the RSS 2.0 feed.
« From Inside the Dark Vault of Dreams
…and they lived happily ever after. »

11 responses to “Keeping on Nano-ing Along”