The Hieroglyphics Teacher Strikes Back

For some background (if you wish), read:

The Hieroglyphics Teacher Makes a Discovery 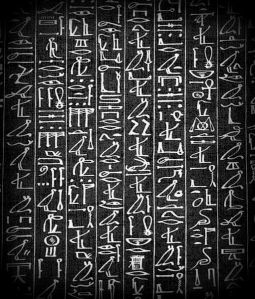 This can’t be happening, Ben thought. There was an artificial copy of himself (which he had named Ben Two) out there who was planning on making an army of other magically animated robots to help him take over the world, or at least help him do less work. As Ben Two’s creator, Ben couldn’t help but feel slightly responsible for the situation.

Ben had let Ben Two teach all his classes for him while Ben just sat home and played computer and ate Pizza Pockets. But now he would have to go out and stop Ben Two.

But first he played an hour of World of Warcraft and had a couple Pizza Pockets.

The first place he went was the police station.

The police officer on duty gave him an easy-going, if totally uncomprehending, smile.

“…who’s teaching your classes for you,” the officer finished. Ben nodded. “And who exactly are you?”

“I’m the hieroglyphics teacher for the archipelago. But I also practice alchemy. I made the simulacrum.” The officer was staring at him in such a way that Ben felt compelled to keep giving information. “Then I told him to teach my classes for me, but now he wants to make more of these robots to replace other people.”

“And I’m worried. There has to be a law against that or something.”

Finally, the officer looked down. “Okay then, so where is this robot-thing now?”

They took the police boat over to the island where Ben’s classes were that day. Ben felt incredibly awkward as he followed the two police officers into the school and into the classroom where Ben Two was teaching. The students were watching a movie with hieroglyphic subtitles. They all gasped to see a copy of their teacher walk into the room, identical except much more disheveled and overweight. 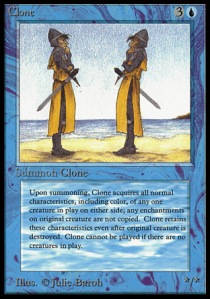 “Excuse me, sir, but this man says you’re a copy of him,” the officer said.

Ben Two stopped the movie. “Actually, I created him,” he said. “Thank you for returning him to me.”

“That’s crazy,” Ben said. “I’m obviously not the simulacrum. Do an X-ray on us and you’ll see.”

“Would you submit to that?” the officer asked Ben Two. Ben Two shook his head. The officer turned and shrugged at Ben. “Sorry, we tried.”

“But who would make an overweight robot?” Ben protested. This all seemed like a bad dream.

“I was curious to see if I could,” Ben Two said. “I also programmed him to believe that he was a human and I was a robot.”

The officers nodded. “Well, you sure did a good job with that part.”

“But why would anyone do that?” Ben asked, becoming almost hysterical.

“I’m sorry to have disturbed you, sir,” the officer said. “What should we do with this thing?”

“I’m a human!” Ben screamed. “Quick, watch me eat something.” Then he remembered that he had made Ben Two able to eat as well. “He can’t go to the bathroom though. Come and watch me go the bathroom!”

“Oh dear, its modesty circuits are malfunctioning again,” Ben Two said. “That happens sometimes. Just drop it at home and I’ll fix it when I get home.”

Ben was dragged off by the police, screaming, “I’m not an it. I’m a human being!”

In the police boat, the police officers poked around for Ben’s off-switch for a bit, then just knocked him on the head a few times. They dropped him off at his house and posted a guard outside.

It really was like a bad dream. He went to get some Pizza Pockets out of the freezer and heard a giggle. He looked up to see the fridge smiling at him.

Fridges are not designed to smile at all, but somehow the blocky, metal appliance gave off the unmistakable impression of smiling.

“Yep, it spilled,” the fridge said. “The eggs are bouncing around inside me like crazy and I think the butter is crying softly in a corner. Do you want to look?”

Ben was sure that he didn’t want to look, but he opened the fridge door (with another giggle from the fridge). The inside was a sea of activity.

I am a writer of anything quirky and weird. I love most genres of fiction and in each there are stories that I would consider "my kind of story". END_OF_DOCUMENT_TOKEN_TO_BE_REPLACED
This entry was posted on Friday, September 20th, 2013 at 12:00 pm and tagged with alchemy, clone, Elixir of Life, fantasy, fiction, funny, hieroglyphics, police, quirky, simulacrum, teaching and posted in Light. You can follow any responses to this entry through the RSS 2.0 feed.
« Being Home for Chuseok
The Green-Walled Church »

5 responses to “The Hieroglyphics Teacher Strikes Back”