Do you remember Xerxes? Back on June 28, 2013, I wrote a story about a strange man living in a strange house in a dimension all by himself (he thought), called Xerxes’ House. It was clearly not a complete story and I always meant to continue, and now I finally have, almost eight months later. Go read the first one if you’d like (it’s good, I swear, and it has a ShyPhone 4 in it), but read this one too.

Xerxes viewed isolation like a bee views honey: he liked it—a lot—and if it wasn’t available, he made his own. It was the whole reason he had bought a house in Dimension XZG-33332, or as the real estate listing said, “a house of unpredictable eccentricity, floating in an abyss of viscous ether. Total isolation guaranteed.” Weird and alone, just the way he liked it.

Then one day, he found a sock in his hall as he was wandering in to grab some lunch. It was a yellow sock and it definitely wasn’t his. He looked up, way up into the infinite void that stretched up above his hall. He hadn’t bought a ceiling for his hall, because he had thought he was the only person in this dimension but now it looked like there were going to be problems.

He strode the kitchen window and immediately Prescient Pigeon fluttered down. “Good morning,” it said, although it was almost five in the afternoon (in a empty dimension, it is very hard to keep track of time). “You want me to find out if there are any houses in this dimension. There are eighteen, one very close.”

At that moment, a small animal climbed up on the window sill next to the pigeon. It stood up on its hind legs and gave Xerxes a look of rapture. “Oh wow, I am so enthralled to meet you, sir. Your least command is my joy and delight.”

“Who are you, Hyperbolic Ferret?” Xerxes asked.

“Obsequious Otter,” the animal said. “I belong to the Henderson family next door. They requested I come here and invite you to a dinner party tomorrow night.” 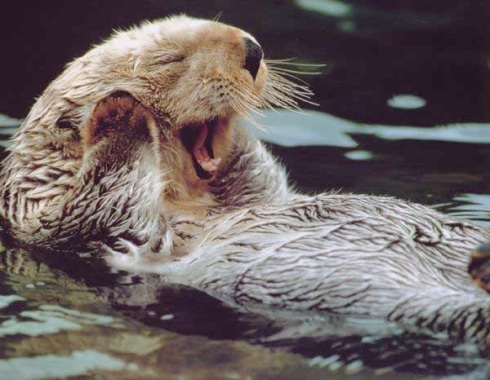 “Oh my gosh, that’s such a great plan. Way to go!” -Obsequious Otter

“I’m not going,” Xerxes said. “Here, take this sock back to them if it’s theirs.” He tossed the yellow sock at the otter.

“I will bear this token to them as proof of your acceptance,” Obsequious Otter said.

“Ah, I’m sure you’re being polite now. You probably feel it necessary to refuse four times before grudgingly accepting.”

“I’ll take that as four,” the otter said and then looked hard at Xerxes. When he did not say anything, it continued, “Ah, I guess in your culture, some time needs to pass for everything to be polite. That is such a wonderful custom you have. I will be back in an hour.” It took the sock and scampered out of sight.

“I’m sorry, I can’t kill him,” Prescient Pigeon said, before Xerxes could ask. “It’s not in my job description. I could order you an Assassin Alligator, but I can’t have it here for two weeks.”

“Don’t worry about it,” Xerxes said.

He went into the laundry room and sat down. The laundry room walls contained the spirit of his ex-girlfriend, Penelope. She wasn’t dead, just inhabiting his walls against her will. It was part of the unique architecture of the building. They had never officially broken up, but considering that she hated his guts now, he had added the ex- part himself.

“What are you doing here?” she asked with a sneer.

“And you expect me to make it all better?”

“No, I just like to remind myself that no matter how bad things can be, they can always get worse.” He sat there and endured the stream of abuse she leveled at him. Yeah, this was a lot worse. It made him feel better.

Finally, she got tired and ran out of swearwords. “So what’s wrong?” she asked.

“The next door neighbors invited me to dinner,” he said. “I came out here to be alone and to get away from people inviting me to stuff.”

“Good, don’t go over there,” she said quickly.

He looked up, intrigued. “Why not?”

“No, don’t,” she said. “I’ve been seeing the dining room wall from over there. His name’s Bumble. I don’t want you to mess anything up for me.”

“I think I’ll go,” Xerxes said. “I do need to be more social, right?” He sat there, smiling, as Penelope invented five minutes of new insults for him on the spot.

Obsequious Otter showed up an hour later and Xerxes said he would go. It clapped its little paws rapturously. “Oh, good decision, sir. Good decision! I knew that there were all sorts of social protocols to be followed. I will come here tomorrow at 6 to guide you to the house. Until then.”

Xerxes had not seen another actual human in over a year and he was not quite sure what to wear. His main motivation for going was to see this wall Bumble and to annoy Penelope, but he wanted to make a statement too. Finally, he picked out a set of chain mail and wrapped a purple bathroom around it, and put a tie on, the other way around so that it went down his back. Yes, he was going to try to have a good time.

To be continued (in the very near future)…

I am a writer of anything quirky and weird. I love most genres of fiction and in each there are stories that I would consider "my kind of story". END_OF_DOCUMENT_TOKEN_TO_BE_REPLACED
This entry was posted on Monday, February 10th, 2014 at 9:26 pm and tagged with fantasy, fiction, girlfriend, multiple dimensions, otter, quirky, real estate, xerxes and posted in Light. You can follow any responses to this entry through the RSS 2.0 feed.
« Jasper’s Lamp – full story
Fructocidal – Friday Fictioneers »