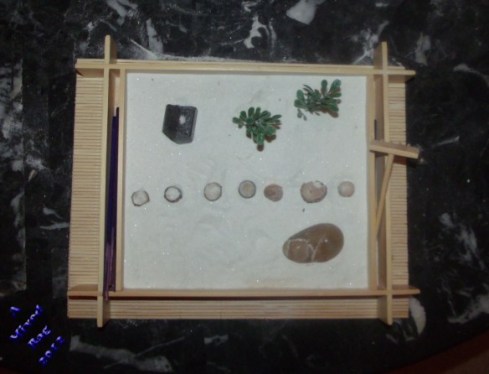 The guards say that no inmates ever went near Karl Zakharin’s zen garden, scratched out of a sandy corner of the exercise ground. Not unless they wanted one of their fingers to become a grisly addition, the center of a newly-pinked swirl of sand. Every day at 10:00 sharp, the crime boss would smooth out the sand and spend an hour drawing circles and whorls with a stick or arranging cigarette butts in an aesthetic fashion.

“Just letting out the rage that’s trapped inside,” he would say to anyone who asked. The guards were not so trusting and routinely dug up the sand patch, looking for contraband. They found nothing.

Three years later, the mystery was solved. A codebook, found 2000 miles away in a gang hideout, detailed the complex language through which Zakharin communicated with his vast syndicate. Authorities also found a commercially-built drone, which had flown high overheard every day, capturing the day’s messages.

Confronted by this evidence, Zakharin only smiled his customary leer of filed points. “It was therapy,” he told guards. “The rage was confined here behind these walls. I was only letting it out into the real world where it belongs.”

Zakharin is believed to have ordered the murders of 136 people while incarcerated.

I am a writer of anything quirky and weird. I love most genres of fiction and in each there are stories that I would consider "my kind of story". END_OF_DOCUMENT_TOKEN_TO_BE_REPLACED
This entry was posted on Sunday, April 20th, 2014 at 10:48 pm and tagged with Alastair's Photo Fiction, CNN, code, crime, crime boss, fiction, flash fiction, murder, prison, Supermax Prison and posted in Dusk. You can follow any responses to this entry through the RSS 2.0 feed.
« Do you think like a Korean student? Take the quiz.
The Butcher of Ipswich »

19 responses to “The Rage Within”