This is an Aftermath story. In the previous story, the Butcher of Ipswich, Damian rescues his friend Nikolai from a butcher who is about to kill him. Due to stress and fear, Damian enters an altered state where he moves faster and is much stronger, but also totally deaf. He escapes the post-apocalyptic city of Ipswich and runs off into the dark, nighttime wasteland. 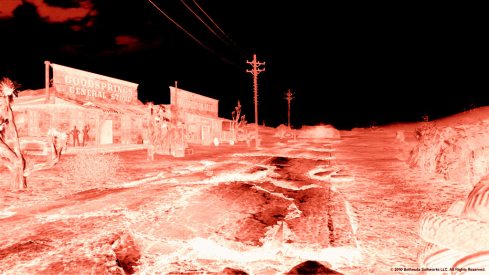 The dark, putrid wasteland echoed with screams and weird cries but Damian heard none of them as he ran, carrying his friend Nikolai in his arms. He had no destination and no plan, except to get as far away as he could from the depraved city of Ipswich. It seemed like almost no time had passed when the sun rose behind him and his shadow—a dark, sickly skeleton—leaped out in front of him. It was only a moment or two before he could feel the sun’s terrible rays burning into his skin, sending up tiny blisters. It didn’t hurt, but some part of his brain beneath the preternatural fog that covered his mind knew he had to get out of the sun immediately.

He was in a narrow lane with ruined houses on both sides. He ducked into the closest house on the left, the only one with an intact roof and dropped Nikolai to the dusty kitchen floor. Damian was still deaf—whatever power had seized him in Ipswich when he had snatched Nikolai from the terrible butcher’s table and fled had also plunged him into a silent world of his own. He would be worried later; for now the lack of screams and cries of pain that had filled every day of his life were absent and he walked in a sort of aural Nirvana.

Nikolai was still unconscious. Damian looked at him and then, in a sudden decision, lay down next to him and went instantly to sleep.

He woke and found himself gazing up into the kindly face of a monster. It was, or had been, a woman, but now her face was swollen and tumorous and her teeth were yellow and sharp. But her eyes were kind and she when she mouthed unheard words to him, he felt strangely reassured. She held a cup up for him to drink and then gave him some food. It was plain stuff but far better than he was used to. After a few minutes, he fell asleep again.

When he awoke again, it was dark and the first thing he noticed was the crackle of a fire. It was indistinct, but his hearing was returning. Nikolai was up as well and eating. “Hello,” he said, when he saw Damian. “Where are we?”

“I don’t know,” Damian said. He would have thought it was all a dream, except they were definitely not in Ipswich anymore.

“What is your name?” the monstrous woman asked, coming over to Damian. She held out a bowl of food for him, which he eagerly accepted.

“Damian,” he said. “I could not hear you before. My ears— but it’s okay now.” Despite his upbringing as a fugitive and her hideous appearance, he found himself trusting the woman. “Do you live here by yourself?”

“No, there are several of us, but they will not show themselves yet,” she said. “We are the Strangemans.”

(To be continued tomorrow. Don’t miss it!)

I am a writer of anything quirky and weird. I love most genres of fiction and in each there are stories that I would consider "my kind of story". END_OF_DOCUMENT_TOKEN_TO_BE_REPLACED
This entry was posted on Tuesday, May 13th, 2014 at 12:01 am and tagged with adventure, aftermath, Damian, fiction, post apocalyptic, science fiction, Strangemans, woman and posted in Aftermath. You can follow any responses to this entry through the RSS 2.0 feed.
« The Best Mother’s Day Ever
The Strangemans (Part 2) »