This is not my typical kind of story, but if you’ve followed me long enough, you know I like to try new things. 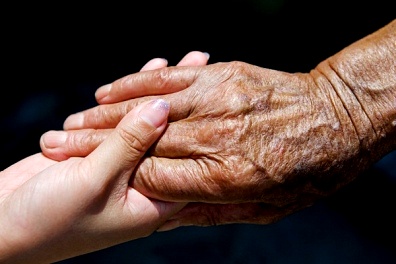 I took Cecil’s wrinkled hand when he knelt in front of me, descending slowly onto arthritic knees. I saw the pain in his face and almost stopped him but I knew it was important to him.

I said yes, of course. When you date a septuagenarian, it’s for life, if only because there’s not much of it left.

For him, at least.

We honeymooned in Tahiti. I would have loved to go snorkeling together, but it wasn’t really an option, not after his bypass surgery three years before. So we spend a lot of time sitting on the beach, holding hands until he drifted off to sleep. It was nice; peaceful.

My best friend Cheryl visited me a week after we got back. We sat by the pool behind Cecil’s mansion—now mine too—and sipped drinks.

“What are you planning on doing after?” Cheryl asked.

“After what?” I asked absently. I was thinking of what to make for dinner.

I stared at her, shocked she would say such a thing. “I haven’t thought about it,” I said. “Geez, I just got married two weeks ago and I’m supposed to be thinking beyond it?”

“It wouldn’t hurt,” Cheryl said, sitting up. “Listen, you’re not going to grow old together. He started doing that when you were in university. You can’t tell me you married him without a plan, that you would have married him if he’d been poor.”

Probably not, I had to admit, but to say that seemed to cheapen our marriage. I married him because I loved him. Didn’t I?

“I love him,” I said. Cheryl nodded, with skeptical eyes.

I realized soon enough how naïve I had been. Cheryl had been the most candid, but everyone I knew seemed to take it for granted that I was a gold digger, just out for Cecil’s money. “Of course, of course,” they would reassure me, smoothing back the social veneer when I protested at their hints and insinuations.

Five years later, I sat by Cecil as he lay in the hospital bed. IV lines invaded the hand that had so lovingly held mine, oxygen tubes filled the nose that had brushed my cheek when he kissed me. I gripped his hand and felt our life slipping away.

“My dear,” he said, opening his eyes. I kissed his hand, accidentally wetting it with my tears.

He closed his eyes again and smiled faintly. “Thank you. Thank you for sharing the last few years of my life with me. My estate is all yours. Go be free and live well.”

“I don’t want your money, I want you,” I said. “I never wanted anything but you. Believe me, please!”

The smile remained on his lips, but he slipped away before he could answer, and I was left alone.

I wanted to give all his money away, just to silence the snide comments and knowing looks. I gave away all that I could afford, making the gossips add ‘stupid’ to ‘gold digger.’

I don’t care anymore. When I visit his gravestone, the accusing voices all fade away and it’s just the two of us again, sitting on the beach together in Tahiti, happy.

I am a writer of anything quirky and weird. I love most genres of fiction and in each there are stories that I would consider "my kind of story". END_OF_DOCUMENT_TOKEN_TO_BE_REPLACED
This entry was posted on Friday, October 24th, 2014 at 11:21 am and tagged with age gap, death, fiction, gold digger, marriage, sadness, Tahiti and posted in Dusk. You can follow any responses to this entry through the RSS 2.0 feed.
« Waiting for Hubby – Friday Fictioneers
Courage at the End – Friday Fictioneers »

21 responses to “After Spouse”