Everyone knows that the squeaky wheel gets the grease and a pirate that doesn’t yell “Avast!” every now and then, or at least swing his cutlass around, is likely going to be ignored.

It was a busy day at the tire garage to begin with. Pete called in sick again, one of the machines broke and the customers just kept coming. Around 10, the guy walked in, dressed like an extra from Pirates of the Carribbean 6: Jack Sparrow Takes Manhattan.

“I need new tires for my ship,” he said.

I frowned. “Ships don’t have tires.”

He wrinkled his brows, thinking. “Spain?”

“Okay, just have a seat, Mr. Greenbeard. We’ll get right on that.” Just then I got a call and I put the form on the desk.

I did look once but the manufacturer laughed at me when I asked for a lookup on tires for an 1802 Spanish brigantine. After that, I was too busy to worry about it and Mr. Greenbeard just sat there, waiting patiently. It was easy enough to ignore him. Soon he just seemed to fade into the décor.

A couple months later, the janitor found me. “You remember that pirate?”

“The one who wanted the tires for his ship.”

“Maybe you should come into the waiting room.” 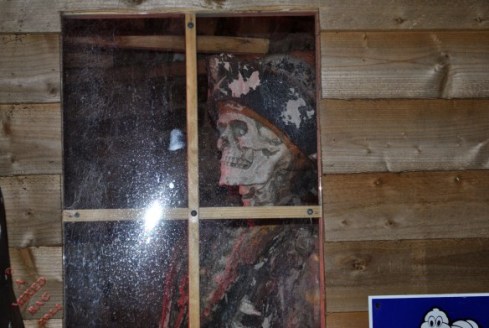 I am a writer of anything quirky and weird. I love most genres of fiction and in each there are stories that I would consider "my kind of story". END_OF_DOCUMENT_TOKEN_TO_BE_REPLACED
This entry was posted on Sunday, February 1st, 2015 at 4:28 pm and tagged with Alastair's Photo Fiction, dark humor, fiction, flash fiction, funny, garage, pirate, ship, tires, waiting room and posted in Light. You can follow any responses to this entry through the RSS 2.0 feed.
« Lighting the Way Home – Friday Fictioneers
The Kiss War »

8 responses to “The Tireless Pirate”