I wrote this originally for Sunday Photo Fiction, which is a story challenge based on a picture. The stories are supposed to be around 200 words. I try to stay close to that but this week it’s a bit longer, just as forewarning. 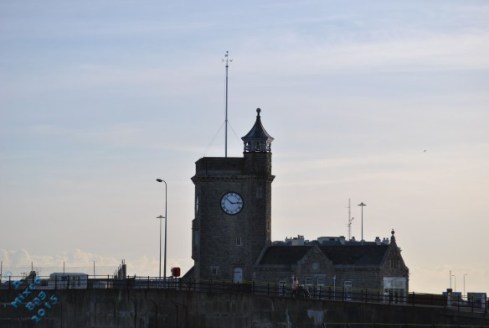 I called her Clock Tower Jill, even back when I was still trying to eat her. I didn’t know her real name because we never talked, of course. She was a quirky one, Clock Tower Jill.

It was July and the hot, muzzy air was hanging like a lead blanket in the forest when I first saw those long legs stepping towards me through the undergrowth. I wasn’t starving but I roared and readied myself to pounce. She picked up a stick and swung it like a bat, right into my snout. That stunned me and before I could recover, she sprinted away. It was too hot for me to run far and by the time I found her, she had reached the ruined town. I saw her at the top of the clock tower, sticking her tongue out at me.

I kept her treed up there for days, out of spite for my hurt snout. Then I realized she would eventually starve to death and I would not get to eat her anyway. So I brought her some food. It was accepted imperiously, without even a thank you. I named her Jill. She was like my pet.

After a month of living up in the tower, she came down and called to me. “You, creature. I want to go down to the lake to swim.”

I had long given up trying to eat her and I stood by to let her go.

“I want to ride you,” she said. I bristled at that, but gave in eventually, since she was my pet.

She sat on my back and held my mane while I trotted down to the lake. I stood guard while she swam and then I brought her back. She was a good pet.

“Good boy,” she said, patting my head before she went back up into her tower. “Bring me something good tonight, okay?” That rankled but I did it for her anyway since I liked having her around. And after all, she was pretty quirky, my Clock Tower Jill.

I am a writer of anything quirky and weird. I love most genres of fiction and in each there are stories that I would consider "my kind of story". END_OF_DOCUMENT_TOKEN_TO_BE_REPLACED
This entry was posted on Monday, June 15th, 2015 at 7:06 pm and tagged with Alastair's Photo Fiction, clock tower, fantasy, fiction, flash fiction, Friday Fictioneers, monster, woman and posted in Dusk. You can follow any responses to this entry through the RSS 2.0 feed.
« Looking for a Deal-Breaker
Piety by Proximity – Friday Fictioneers »