Clearly I should have read this two days ago, on the actual day. I’m reblogging this because Susannah has a powerful way of expressing things and she was actually there and she’s right that we should remember. In a lot of ways I don’t want to remember September 11, at least I don’t want to remember and relive all the pain and heartache of that day. But still, we shouldn’t forget. 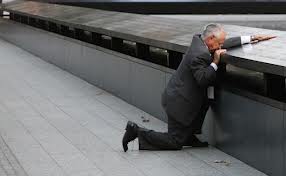 We must never forget….

I live right near the Frank E. Campbell Funeral Chapel, and on the night of September 11th I went there to see if there was anything I could do: answer phones, comfort someone, that sort of thing.

When I walked in their side door on 80th Street you could have heard a pin drop. Not one casualty so far, same as the hospital where I had just been giving blood. Dominick, one of the directors said, what they had expected hadn’t happened, at least not yet, but then while talking, a hearse pulled up.

The first fatality to be brought in was Father Mychal Judge, the beloved Chaplain of The New York Fire Department who, when he heard what had happened, rushed downtown to help. When the South Tower collapsed he was killed instantly.

I am a writer of anything quirky and weird. I love most genres of fiction and in each there are stories that I would consider "my kind of story". END_OF_DOCUMENT_TOKEN_TO_BE_REPLACED
This entry was posted on Sunday, September 13th, 2015 at 6:31 pm and posted in Uncategorized. You can follow any responses to this entry through the RSS 2.0 feed.
« Breaking Wild
Attempted Evil »