My First Taxi Ride in Mongolia 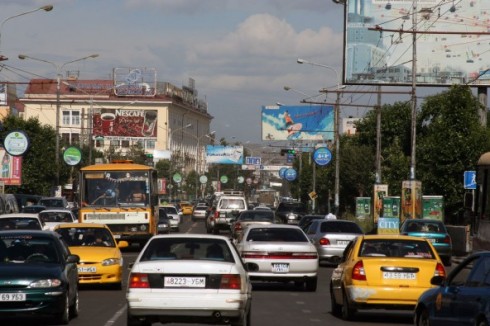 I recently spent eight days in Mongolia and traveled all over the capital city of Ulaanbaatar. Most of the time I just walked. Part of the reason is that with how bad the traffic can be there, it can actually be faster to walk than take a taxi, but also taking a taxi where there is no common language can be very frustrating for many reasons. This is why Uber is so convenient, where it exists. However, I did take a taxi twice in Ulaanbaatar. The second time was to the airport to get my boxes of materials out of customs and walking there wasn’t really an option.

The first time I took a taxi was the first day I was in the country. I had a school visit in the afternoon and got the hotel to call one for me. If I had gone there after I’d been in the country for a while, I would have just walked, even though it was about a mile and a half. However, I did not want to get lost and be late that first day.

I thought that the hotel receptionist had told the taxi driver where I wanted to go but apparently not. Finally, after me saying the name and pointing at the map on my phone, he had me type it into Google maps on his phone and away we went.

We immediately went the opposite direction.

I could see that on my own phone but I had also been in the country 14 hours and there are often weird traffic patterns that I might not know about. I once yelled at a taxi driver in Abu Dhabi for taking me way out of the way, only to find out when I got to the hotel that that was the only way to get there. This piece of knowledge competed in my brain with the equally valid knowledge that this taxi driver knew I was new to the country and he could take me anywhere he wanted and I would have to pay him. Mostly I was worried about being late.

After we’d gone a few blocks in the exact opposite direction, I decided to show him my phone to confirm our route, doing my best non-verbal equivalent of “hey, what’s going on, this doesn’t seem to be the right way” (I don’t remember what that was now). He made a little “ah” noise and then turned onto a bigger road. Okay, all good. I could see on my phone that it connected with another highway that led up near the school. We were good.

He went a little way, then turned off the big road onto a small, congested road that led directly through the city center. His general demeanor was one of “don’t worry, I know what’s going on.”

Mine was one of frustration. Part of the problem was that it is a very helpless feeling sitting in the back of a car in a country that you do not know at all being driven by someone with whom you do not share a common language and who may see you as a rich foreigner who can spare the money to be driven around for an hour or two. Mostly though, I was afraid I was going to be late. I hate to be late, especially for work. I had given myself half an hour to go a mile and a half and now it seemed like I was going to need all of that.

It didn’t help that he turned off the meter at this point. The meter is the friend of a taxi passenger in a foreign country since it is an objective number you can point at when they ask for money. If they “forget” to turn it on or just turn it off, they can ask for any amount they want. The hotel said it should cost about 7000 tugriks for the trip (less than $3 USD), so I decided just to pay that when we got there.

We started making better time and at least we were going in the right direction. It was obvious I was following our progress on the map on our phone, so I thought that had convinced him to stop screwing around and just get there. My impatience was probably pretty evident as the time got closer and closer to the meeting time.

He started tapping away at his phone at one stop, which isn’t very uncommon with taxi drivers. Then he turned and showed me the screen. He had pulled up Google Translate and the screen read, “Please forgive me, I was wrong.”

It’s hard to stay mad at someone after that. I told him it was okay and it all turned out in the end. We got to the school exactly on time and I paid him the 7000 tugriks, which he accepted without complaint.

Still, I walked when I could after that.

I am a writer of anything quirky and weird. I love most genres of fiction and in each there are stories that I would consider "my kind of story". END_OF_DOCUMENT_TOKEN_TO_BE_REPLACED
This entry was posted on Tuesday, November 5th, 2019 at 8:06 pm and tagged with Mongolia, taxi, taxi driver, travel, travelogue, Ulaanbaatar and posted in Travelogue. You can follow any responses to this entry through the RSS 2.0 feed.
« Chad
Hey, You Never Know »

3 responses to “My First Taxi Ride in Mongolia”