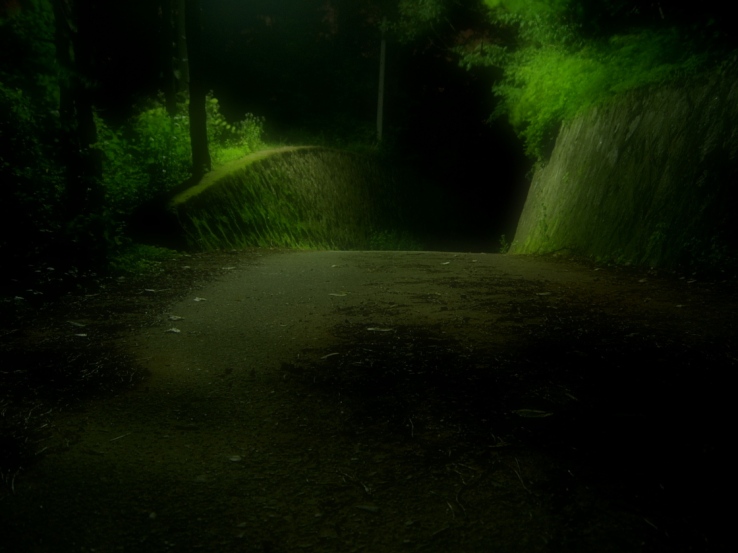 The darkness enveloped me on all sides like a shroud of fear. Leaves, twisting and shuddering in the night breeze, fled across my path as I steered my bike down the quickly darkening lane. Streetlights gleamed periodically through the gloom. It was becoming foggy.

Strange, I thought. They said that fog almost never appeared in that area. In fact, it was the first time I had ever seen fog this thick and cold. A sense of panic crept over me with clutching fingers as the mist settled around me. My bike was already dripping with condensation and I was damp from the fog and an anxious sweat. My hands were becoming numb from the wet steel handlebars and I was getting tired.

The turnoff to my driveway should be somewhere up ahead. It was taking longer than I had remembered. Maybe I had already passed it, obscured by trees, darkness and the mist that now blanketed everything. I had only lived in the area for two weeks and I had never gone much farther down the lane beyond my house.  Something had always restrained me, a small tugging in my heart to do something else that had always seemed more important.

Suddenly, as if pulled by a preternatural sense, I turned to see two small points of light piercing the gloom some ways behind me. Headlights. An irrational terror seized me, as if those lights were the roving eyes of a beast that was searching me out. I looked wildly for a place to hide, to escape.  The trees seemed to draw closer to the sides of the road, blocking any passage through them. Retreat was out of the question. The only way was forward. If only I could reach my driveway before those lights overtook me.  I slammed the bike into a higher gear and started to pedal harder. The sleek frame sped along the slick asphalt.

I was being silly, I realized. The headlights behind me most likely belonged to a farmer, driving home from the store. I started to slow my pace until I looked back at the lights again, much closer now. Those pale, unrelenting beams bored straight into my mind, melting all logic and rational thought as they went. Adrenaline flooded my veins and again I was off like a shot. My muscles were aching and I was dragging in breaths in ragged gasps.

The car was closing fast; my last burst of energy had made little difference. At any moment it might overtake me. Then, at the last moment, it appeared:  my driveway, like a tunnel in the trees on the right. The brakes let out an indignant shriek from the water, and gravel flew as I skidded recklessly into the driveway seconds before the car roared past. I took a deep breath and turned to go up to the house.

With a start, I noticed for the first time the tall iron-wrought gate that now barred my way. Beyond it, row upon row upon countless row of bone-white gravestones rose like broken teeth out of the fog.

This was not my driveway.