For those of you unfamiliar with the Bible, the most famous Lazarus was a man who died and whom Jesus brought back to life. However, there is also another Lazarus in the Bible. This story takes its title from both of them, although somewhat indirectly.

This is a story for Al Forbes’ Sunday Photo Fiction. 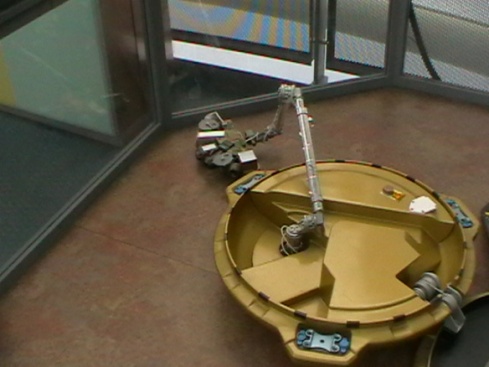 These were the only names the dog had ever been called. Born to a mongrel mother in a nest of refuse, he was filthy an hour out of the womb and stayed that way his whole life.

But he was a survivor. He quickly learned where to find the best garbage and how to get into small, warm places to survive the Russian winters. One night, he wormed his way under the chain link fence of a large lab and through a door left ajar, where light and delicious smells were waiting for him.

“Ah! A stray!” Something shiny and round whistled through the air, the last thing the dog ever saw.

“Are you crazy? That mechanism costs more than your house!”

“It’s fine. See? No damage.” The scientist wiped the dog’s blood off the metal circle, then fitted it into the deep-space probe.

Years later, after billions of miles in the icy void of space, the probe was picked up, scanned, and the residual DNA aboard coaxed into life, tail wagging, bright eyes gleaming. The new species Dog lives there in peace and luxury, the countless millions of copies pampered like the original never was.

In general, I really like living in the future. Except for all the car-sized mosquitoes buzzing around. That is not as cool.

It all started with the super soldiers. Of course, here in the future “super soldier” has become a catchphrase for anything cool. “Hey, that was a real supersoldier movie last night.” “That girl is really supersoldiering.”

Except this time, it really had to do with super soldiers. The problem started with the drones. After drones became commonplace, every country had them and suddenly war became very easy and not that costly. One country’s robots fought another country’s robots and every else sat home and watched it on the evening news. The public began to feel that the government was making war too frivolous, now that they could have a war whenever they wanted to. The military just felt left out.

However, by that point war had progressed far beyond human capabilities, so they turned to super soldiers. Using cloning and genetic manipulation, they made a whole new type of soldier. They were egalitarian about it: there were super cooks, super MPs, super aircraft mechanics, every kind of soldier you could think of.

This was all well and good, but no one really knew what the effects of all this new cloning would be. Some thought that the super infantrymen would go rogue and start shooting up civilians, while the super cooks would take the Food Network by storm. Instead, one super soldier got bitten by a mosquito.

It turns out it wasn’t an ordinary mosquito. Its mother had bitten a cow that had been eating genetically modified corn and being pumped full of steroids, so the blood was a real stew of steroids, hormones and Franken-DNA. Then when the young mosquito took in that sweet super soldier blood, it started to get bigger. And bigger. The first time a monstrous mosquito swooped down and sucked all the blood out of a running back during the Super Bowl, it made quite an impression on people. Stocks in Raid and Amalgamated Swatters, Inc. went through the roof.

It hasn’t really affected daily life much. In the cities, there are anti-aircraft RAID guns set up, and most people have catapult-sized fly swatters on their cars.

What I really miss is hiking and camping. Now, if I want to go camping, I need to bring along a Kevlar tent and a dog I don’t really like, and just hope for the best.