The Jinn of Sevilla – Visual Fiction 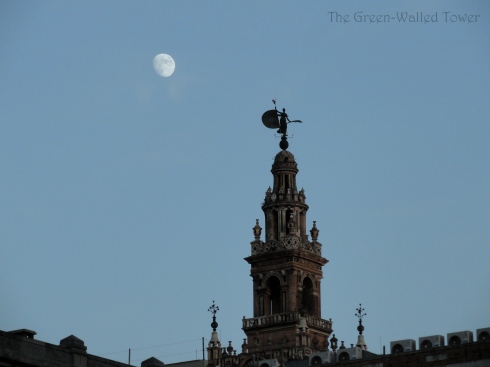 It seems that after all these years, I have become a Spaniard, and a Sevillano at that. I have fallen in love with this city of luxuriant plazas and opulent cool groves—so similar and yet so different from my faraway home of burning sands and frigid nights of crystal-dusted skies.

I first came across the strait with Tariq ibn Ziyad, landing on the rocks that still bear his name. I was in the sparks that flew from his horse’s hooves and the light that flashed along the blade of his sword. I was the fire burning in his heart that spurred him and his followers on to victory.

I was with Jabir ibn Aflah as he planned and built the Giralda where I now live and look down on the city that I have adopted over centuries of residence. It has grown slowly but I always stay the same.

There are no other jinn here. Sometimes I think about returning to those hot, dusty expanses of my youth, far over water and sand and lands that have become strange to me. The moods come but then pass. Here, in my Sevilla, I carry on an austere companionship with the people. At sunset, when I come out to bid farewell to the Great Lady for another day, the people see my fire gleaming on the edges of the shield of Faith at the top of the tower.