Looking for a Deal-Breaker

Looking for a Deal-Breaker

“Here’s the kitchen, where Mrs. Hernandez hacked up her husband,” I said.

The oohs and ahhs sounded disturbingly enthusiastic. The family crowded around the spot. I needed to change tactics.

“The toaster is possessed. If it catches you—”

“You’re toast?” the mother said. They all laughed. The father snapped a picture.

I started to panic. If they passed on this house, the boss said I could buy it.

“It’s part of a homeowner association!” I blurted out.

I expected horror but they just smiled creepily. “It’s okay, we like HOAs,” the father said.

I let them have the house.

My apologies to anyone who likes their homeowners association. Here are some reasons why I’ll never be part of one though.

The Chronicles of the Moldlands: Forgotten Bagel

Warning: While this is technically classified as Apocryphal History, some may consider it more in the genre of Horror because of its subject matter. If you have a phobia of mold, you’ve been warned. But read it anyway, since it’s a good laugh.

Life first sprang into being on the high plateau of Fridge, on the rising mounds of Forgotten Bagel. It was a primitive sort of life: growing, eating, spreading slowly, and happy just to discover the occasional half-buried blueberry. A filmy plastic covered the hills and so life was contained for a while.

The gods inhabited the Great House at that time, but soon there came the time of the Impromptu Vacation, and the gods departed from the house for the far country of Aruba. They never returned to the house again.

The civilization of Forgotten Bagel thrived until it had covered the hills and was straining to break the filmy bonds that constrained its expansion. It was the great explorer Schimmel Penicillium who led the first voyage to find the way out of the barrier. He came out into open air and into the strange land of Kitchen. He founded colonies wherever he found suitable ground and the Cillium Empire was formed. Schimmel claimed the title of Grand Mouchla and set up his capital in the caves of Bread Box, which were much more central than Forgotten Bagel. He assimilated the locals and for a while, the Cillium Empire grew like an infestation. 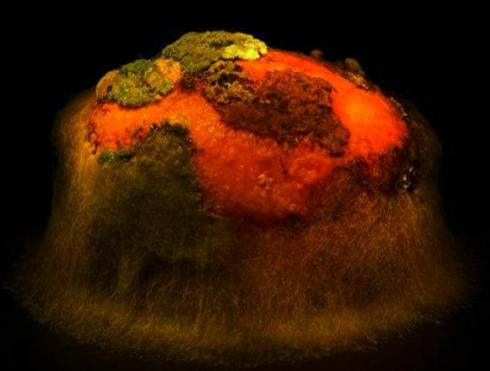 Try not to think of what this was originally

But there were areas of concern. Scouting spores returned to report a deep cavern of mystery named Trashbin that was filled with food and land of unimaginable richness, but was also inhabited by strange and wondrous monsters. Then there were the legends of the dark underworld known as Drain. The people of Drain were said to be dark and strong, with a touch that poisoned everything.

The Cillium Empire flourished and soon built foil mines and developed weapons and aircraft out of aluminum. So it was that the first Cillians landed in the wide basin of Sink and stood before the mighty entrance to the dark land of Drain.

Drain was wet and slick and the entrance was surrounded by slimy black fortifications. The Cillian forces were wary but approached with weapons at the ready. Still, they were not prepared for the onslaught that came. Suddenly millions of black Cladospores poured out, overwhelming the Cillians and capturing their aluminum aircraft and weapons.

The defeat caused panic throughout the Cillium Empire. The Grand Mouchla–at this time the great-grandson of Schimmel Penicillium–stationed guards around the borders of Sink. However, the Cladospores did not spread beyond the borders of Drain and slowly the panic subsided. Still, the Grand Mouchla did not like having such a potent threat so close to his empire.

Then one of the patrols came back with an interesting report. They observed water dripping from the dead waterfall of Tap. Some of the Cillian scientists conjectured that the Cladospores depended on this water and if they could totally shut off Tap, the Cladospores would die. The Cillians had recently discovered a cache of huge and terribly strong steel cables called Twist-Ties and now they undertook a project to bind these together and attach them to the upper portion of Tap, hoping to pull it closed.

After two generations, the grand project was finished and a long line of Twist-Ties was looped around the upper part of Tap and up to a hook above it. Cillian engineers winched the Tap up, but they quickly found that they were very mistaken about the workings of Tap and instead of shutting off the water, it began to gush out in a flood. The Cladospores were obliterated, washed down into the furthest recesses of Drain and a great threat to the Cillium Empire was gone. Some worried that this was only inundating the Cladospores with the resource that they needed most, but most agreed that while Tap was pouring forth water, the Cladospores would never again be able to emerge from Drain. And so, for a time, there was peace in the wide land of Kitchen. 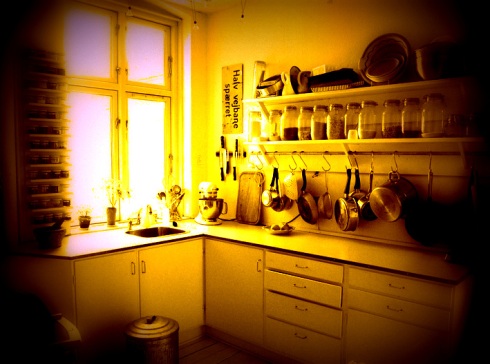