This piece is unusual for this blog because it’s true. These days I’ve been taking the bus to and from work. It’s not a bad commute, usually only about 15 minutes and the buses are never crowded. If you have to take public transportation, take it where it’s not that popular, as opposed to Korea where I once counted about 90 people on my bus and only then because I was taller than most of them.

The best part of taking the bus (besides sitting and listening to audiobooks) is watching the other people. Most people tend to blend together, just masked figures that get on quietly and sit engrossed in their phones but sometimes someone will stand out.

One is a little girl that has started getting on with her mother a few stops after me. She’s probably about three with a mass of curly hair and every time she gets on the bus, it’s like watching a little Indiana Jones about to embark on a new adventure. She is so excited to be on the bus and looking around with barely contained energy and excitement. Her mother picked her up last time to keep her from charging ahead on her own and the little explorer yelled “Yaaaay!” all the way back to their seats.

On the way home that same day, the bus stopped for an old man with a bald head and a thick white beard that stuck out from his chin like a pharaoh’s beard. He seemed to be homeless and the first thing he did when the doors opened was throw a bundle of blankets and clothes into the bus before going back to get his backpack and other things. Everyone waited while he climbed on, then scooped up all his possessions and pushed them into an empty seat, smiling and saying thank you the whole time. He seemed to be wearing about four shirts of various styles.

Two very different people from different stages of life but both very happy just to be riding the bus.

I normally post only fiction here, but since I’m currently traveling in Southeast Asia for work, I have more than my normal share of interesting stories to share.

Because I’m traveling for work, I actually have to work even in the evenings, although I’m sure some people think I’m just on vacation. This involves hours of emails and other computer work and since I don’t like sitting alone in my hotel room for hours, I like to go to coffee shops

This evening after dinner, I found a second-floor coffee shop on a main road in Hanoi and ordered a medium milk coffee. However, when they brought it, there was almost nothing in the cup. This wasn’t a small, let alone a medium. It looked like the dregs left over when someone finishes their drink. I brought it up and asked about it just to make sure I’d gotten the right thing. They said they’d bring another cup even though I insisted it wasn’t necessary.

Then I tasted it. It was definitely NOT milk coffee. It was very strong and tasted quite like . . . I checked the receipt and yep, they had given me an espresso. I had asked for a ca phe sua (milk coffee) and she had apparently heard the “s” and that was all.

It was about that time that they brought the second espresso. Not only did I feel like a jerk for complaining (from their point of view) that my espresso was too small, but now I had two of them at 8:00 pm. Of course, I wasn’t obligated to drink them, but hey, it was free coffee.

Well, at least I can get a lot done tonight.

This is a true story, as evidenced by the photographs. But you know me: I can’t help dramatizing things a little.

I saw a preview of the apocalypse this past weekend as masses of humanity pressed together, fighting to ascend (and then descend) a steep, rain-soaked path of tumbled rocks. The horror, the horror…

The sky was overcast when I left the house in the morning. I couldn’t find my umbrella, but I had a magic talisman that prevented rain. At least, it rarely rained when I was carrying it and I believe strongly in the principle that correlation implies causation.

I got to the mountain (which is also a provincial park) and as the bus passed long lines of cars parked along the side of the road, my heart sank like a bowling ball in a banana souffle. It was, as the Chinese say, a mountain of people, a sea of people. If zombie hordes wore expensive hiking gear and preyed on autumn leaves, I would have been in a George Romero film.

The rain started as a fine mist about halfway up the mountain. By the time I got to the park’s famed Cloud Bridge, the path had bottlenecked and so we all stood in the rain, shuffling forward at a snail’s pace until I finally reached the bridge. I looked down at the path 250 feet below me and saw the winding, ant-like column of hikers abandoning the mountain.

I saw a sign saying the maximum number of people on the bridge was 200. Not that anyone was counting.

I gave up the idea of going to the peak. A cloud had sat on the mountain as if it were snuggling into an easy chair and after the bridge was a treacherous metal stairway, over 200 feet high and as steep as a ladder. I wasn’t the only one who decided to cut the trip short and head for the cable car station nearby for a quick trip to the bottom. The trails were choked with sodden hikers, some with expensive cameras, jewelry and nice purses, all picking their way down the slick rocks. I felt like we were refugees from some disaster. 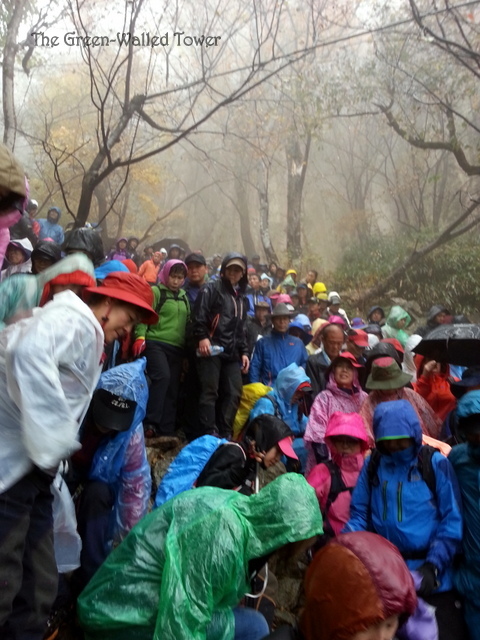 The group on the left are the ones who climbed under a railing and swarmed down the rocks to cut in line on the main path.

“All it takes is one person to slip…” I kept thinking.

There was a two-hour wait for the cable car, nowhere to sit and nowhere particularly warm. At least the view was pretty.

I got home four hours later and soon the apocalypse was only a distant memory. It’s amazing what a hot shower can cure. 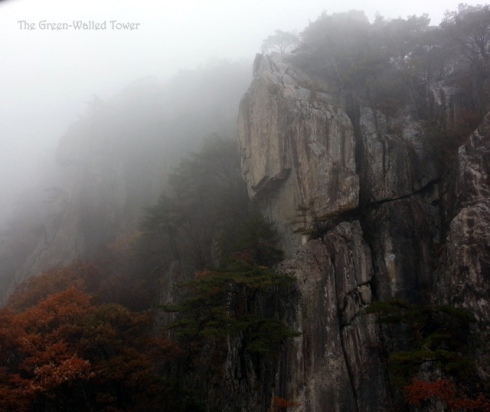