“Take your glaucoma medicine,” they said.

“Don’t overexert yourself,” they said.

I say, nuts to that! What golden future am I saving my strength for? I’m well over the hill and coasting fast towards the finish line, etched with a cold, hard epitaph. This is my car and I’ll take it for one last ride, damn it!

Only one good hip? Who cares! That’s one more than a cobra has and it’ll bite you in the ass if you don’t watch it. Don’t underestimate me just because I’m older than you.

Sirens. “Pull over!” they say.

Nuts to you, copper!

Recollections of an Elderly Dragon

A few days ago, I sat down for a fireside chat with octocentarian dragon, Hargog the Destroyer. It wasn’t intended as a fireside chat, but he inadvertently set part of the coffee shop on fire. He can still knock them out when he wants to!

Interviewer: Thank you for meeting with me. It must be harder to get around these days. Congratulations on passing your 800th birthday, by the way.

Hargog: Thank you. I try to stay active. I won’t win any races with jet planes, but I try to go out in the countryside twice a month at least. Just for some light ravaging. The Society helps me a lot when I don’t feel up to it.

H: The Society for the Preservation Of Reptilian Kings, or SPORK for short. They bring me food every week: a couple of sheep, maybe a cow.

H: Come on, that’s not fair. No one can be blamed for the way they were raised, and that was just the culture back then. I swore off maidens a long time ago. It was a simpler time back then, but I know—the world changes.

I: Back in 1543, Yorker Magazine referred to you as “the Scourge of the Midlands” and “the Defiler of Nations.” Have your feelings on those titles changed at all?

H: Well, “Defiler of Nations” is a bit of a hyperbole. They weren’t that clean when I got there anyway, am I right? “Scourge of the Midlands” though—that’s a funny story. I was cruising around with my friend Grimlock, a silver drake, and we were comparing our tail snaps. We had just eaten a whole tavern and were preeettty tipsy. So Grimlock bets me a mountain of gold I can’t destroy the cottage up ahead with one whip of my tail. Bang! I nailed it, first time. So then he says “double or nothing on the castle on the hill.” We did that all night. It messed up the area pretty bad.

I: I’m sorry to hear your father passed away 150 years ago. How was your relationship with him?

H: Well, he was a gold drake, and you know gold drakes. Always gotta be the best. He didn’t have time for a little green drake like me, what with plundering the whole known world and hoarding their treasures. He was a great one for hoarding and it’s not the sort of hobby a father and son can share. I moved out when I was 160 and we didn’t really didn’t talk after that. He didn’t even call when I destroyed Constantinople and ate ten thousand of its residents. He wasn’t really supportive that way.

H: Well, no life is perfect, I suppose. I would have liked to see more of the world. I was born in Scotland and I used to travel all over Europe in my youth. I could have gone further—I even got an invitation from a lithe little Chinese dragon who asked me to come and hang out on top of her mystic mountain for a few centuries. But I was in kind of a ravage-plunder-hoard rut at the time. I’ve thought about her a lot in the last half millennium though. I think she finally went under the sea to hang out with the Dragon King.

I: What would you say your proudest moment was?

H: About 250 years ago, a fire demon woke up and started burning half of Poland—you probably heard about it. Anyway, I went to take care of him. It wasn’t just protecting the dragon monopoly on mayhem either—this thing was burning down whole towns and cities. I mean, where’s the ecology, right? I fought that thing for a month, at least. They can’t die—they’re immortal—but eventually he gave up and I banished him to Greenland to cool him off a a bit and think about what he’d done. I hear he’s posing as a Wendigo up there now, but at least he’s not hurting anyone.

I: So, any plans for the future?

H: I don’t know. After you pass 800, you start to slow down a little. I guess I’ll just try to stay active and not destroy the neighborhood when I go out to check the mail. I got a pamphlet for a tour that visits the sunken city of R’lyeh. Sounds like fun. We’ll see.

I: Thank you again for meeting with me, Hargog the Destroyer. It’s been a pleasure.

H: No problem. I appreciate that people still have some interest in me. You’d better leave first. I’d hate to step on you on the way out. 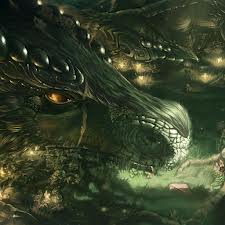 Happy Valentine’s Day to everyone. Here’s a picture my wife sent me today. She made it here, if you want to check it out. So, I pass it on to you as well. Have a great day.