Holding the Bridge – A Story Reframed

I’m very interested in framing: what a story shows and what it doesn’t through its words. This is especially pertinent with the 100-word Friday Fictioneers stories I write every week, which have to show a complete story through a 10×10 aperture. That often means that important details and implications are left up to the reader to infer. Sometimes they do and sometimes they come away with a very different message from what I put into it.

Last week, I wrote the story Holding the Bridge, about a man guarding a bridge to a resort while hungry people came begging and eventually swarmed across the river anyway. Most commenters assumed he had been killed by the mob, which was an interesting idea and worked with the story, but wasn’t what I had intended at all.  So, with more words to work with, here is the story as I intended it. 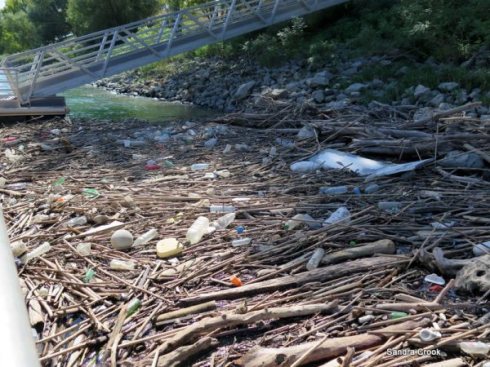 Holding the Bridge – A Story Reframed

I stood on the bridge in my new uniform, picking at the hat’s tight elastic under my chin.

“It’ll stretch out soon,” my boss said. “Once you’ve been here long enough. Remember, this is an easy job: just make sure no one comes over this bridge without a pass.”

He was right: it was a cushy job at that forgotten back entrance to the resort, sitting in my sagging lawn chair and pulling the sticky hat elastic away from my sweaty skin. Sometimes the shouts of rich vacationers found their way through the dense foliage but mostly there was no sound but the trickle of water and the buzz of vampiric mosquitoes.

Peaceful, at least, until the famine came and desperate people came begging. Then the door at the end of the bridge was kept locked and I was not given the key. Just keep them away, will you?

They came one by one at first. Just a cup of water. Just a bite of bread.

Sorry. I wish I could.

Then more and more. Damn you, you little brat. Let us in!

I stood at the end of the bridge with that single, hollow word on my tongue while my freshly-pressed company hat soaked up my sweat and its accursed elastic choked off my air supply.

I watched as they finally threw sticks and garbage into the river, choking the flow and making the bridge that I could not provide. As darkness fell, I took off my jacket and added it to their effort.

Soon they started to clamber across. Just before I went down to help them across, I pulled off the hat, snapping the elastic.

It never stretched out, I thought. I wouldn’t have wanted it to.