Xerxes is one weird guy. He lives in a house in an empty dimension, with some very eccentric characters like his sentient walls and his courier, Prescient Pigeon. Read the preceding stories here if you want: 1. Xerxes’ House 2. Xerxes’ Neighbors 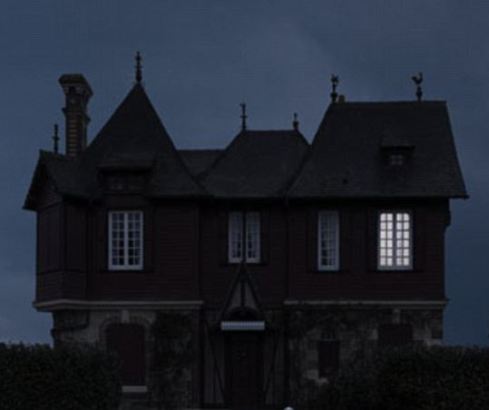 Xerxes was about to go out to a social occasion for the first time since he had moved to the empty dimension where his house was. He had moved there to be alone, but the real estate agency had moved other houses into the dimension and now he was about to go to a neighboring house for dinner. He didn’t particularly want to, but his ex-girlfriend Penelope, who was now his laundry room wall, was dating the dining room wall of the other house and Xerxes wanted to investigate.

At six o’clock, the neighbors’ Obsequious Otter appeared at the front door. “Wonderful ensemble, sir,” it gasped. “I see you are truly ready for this evening.” Xerxes was wearing chain mail, with a bathrobe wrapped around it. “If you would, follow me.”

Xerxes had been curious how this was going to work. He had not been out of the house in the year since he had come to this dimension. Of course, it was an empty dimension, which meant that there wasn’t supposed to be anything in the whole universe except his house. That was the point. The animals, like his Prescient Pigeon or Obsequious Otter, could come and go but they were animals and he didn’t know or care how they did it.

He took a step out his door and immediately stepped onto another porch. For a moment, he had a horrible feeling the two houses were connected, but that wasn’t right. He’d looked out his door before and seen only grey nothingness.

The door opened and a man in a green sweater opened the door. “Mr. Xerxes!” he said. “My name is Ralph Henderson. Welcome to our home.”

“Dr. Xerxes,” Xerxes said. Xerxes wasn’t his last name and he wasn’t a doctor, but he still considered this his dimension and here he made the rules.

“Occasionally,” Xerxes said, still determined to be as hard to get along with as possible. He stepped inside, took off his bathrobe and hung it on the hat stand.

“Ah . . . can I get you something to drink?” Ralph Henderson asked, his etiquette compass wobbling slightly off true north.

Ralph frowned. “I do believe we do, in fact.”

“Okay, anything but that. Where’s your dining room?”

“Um, it’s in here, although my wife Heidi hasn’t quite finished with the meal—”

“That’s fine, I just want to talk to the wall.”

“You mean Bumble? How do you know him?”

“He’s dating my ex-girlfriend,” Xerxes said and walked into the dining room. Heidi Henderson was there, setting the table.

“Doctor, actually,” Xerxes said, not looking at her and giving a sort of half-wave. He faced the wall. “You Bumble?”

“Um, uh, well, if by that do you mean is Bumble my name, then, then yes. Yes it is,” the wall said. A tremor went through the china hutch pushed up against it.

“Laundry room, actually. Two industrial washing machines pushed up against her; big old shelves with detergent and fabric softener on them. That’s her.”

Why am I doing this? Xerxes thought. It wasn’t even that he was jealous. He sure didn’t want to get back together with Penelope, so why was he trying to sabotage things for her? I think I’m just a terrible person, he thought.

Xerxes turned to see the Hendersons standing in the doorway, apparently unsure what to do next. “It’ll still be a few minutes before dinner,” Ralph said. “Do you play chess?”

“No, I only play one game. Do you know strip Russian roulette?”

“Yeah, it’s just like normal Russian roulette, but when you lose, you take off a piece of clothing. If you don’t have a gun, I could go get mine.”

The two Hendersons were looking at him as if he were a maniac. The problem was that Xerxes said everything in such a serious way, that no one ever knew if he was serious or not. Even Xerxes wasn’t sure sometimes, which was why he preferred to be alone. That way, if he wasn’t joking about something, it was only Xerxes that found out.

“Let’s just watch some TV,” Ralph said. Xerxes nodded and followed him out to the living room, his chain mail clinking slightly.

During dinner, Xerxes tried to keep as quiet as possible. He had a vague feeling he was doing everything wrong and while he didn’t care, he had another vague feeling he should care, for some reason. So, he was just trying to get through the meal and go home. At least the roast beef was really good. Everything would have been fine, but the Hendersons kept insisting on talking.

“So, Dr. Xerxes, how long have you been in this dimension?” Heidi asked, refilling his wine glass.

“Since the beginning,” Xerxes said. “It’s mine.”

“Ah, well we appreciate you sharing it with us,” she said. “We really like it here, so peaceful and serene.”

“I didn’t agree to share it. I think you’re invading my space.” There was an awkward silence. Xerxes helped himself to some more roast beef.

“Well, I don’t want any company. I just want to be by myself,” Xerxes said.

“Then why did you accept our invitation to dinner?”

“I wanted to see your wall Bumble, to annoy my ex-girlfriend.” The atmosphere had gotten almost frosty. Maybe I shouldn’t be so honest, Xerxes thought. That was another reason he hated social situations. Sometimes he had to tell the truth, sometimes he had to lie and he couldn’t keep track of which was which. He could see the Hendersons looking at him with an expression close to disgust and for a split second, he didn’t like himself.

“I’m going to go now,” he said. “I’m sorry. I’ll take the rest of the roast beef home though. It’s very good.” He picked up the plate and walked out the front door. It wasn’t until he got home that he realized he’d forgotten his bathrobe.