Being Home for Chuseok

I remember our first year in Korea, long ago in 2002. We came in late August and a few weeks later, we found out that we had a few days off, for a holiday called Chuseok. I remember that a Korean woman at church was arranging a trip to an amusement park for a lot of the foreigners because, she said, “it must be so hard to be away from your family on Chuseok.” 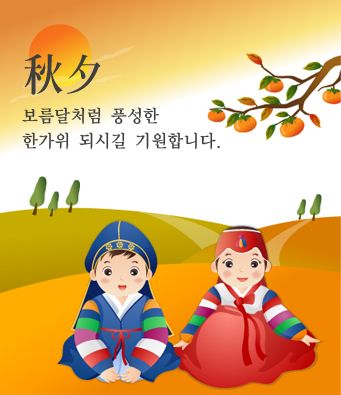 A traditional Chuseok scene. The message says: “Wishing you a Chuseok as bountiful as the full moon.”

Hard to be away from my family on Chuseok? Not particularly, since I had just found out about the holiday a few days before.

But for Koreans, Chuseok is a big deal. It is one of the two biggest holidays of the year, along with the Lunar New Year. It falls on August 15 (according to the lunar calendar) which means that it always coincides with the full moon.

There are several traditions at Chuseok. The main activity, like Thanksgiving, is to get together with family and eat a lot and hang out. For this reason, men and children love it, and women usually dread it. They see it as a time of pretty much non-stop cooking, which it is for them.

People dress up in hanbok (traditional Korean clothes: see the above picture), sometimes play traditional games, and also give gifts. Gifts are usually given between families, however, or to co-workers, and are usually gift sets of food or other things.

The other traditions are cleaning the graves of ancestors, along with memorial rites. As well, the whole family gets together to make songpyeon, which are steamed rice cakes with sugar and sesame seeds inside. They are steamed with pine needles, which gives them a bit of a different taste (although not much).

Songpyeon made by hand are not this neat, usually.

For me, as a foreigner, the main thing I notice about Chuseok (besides the days off work) is the traffic. It is getting better these days with better highways, but still Chuseok traffic is usually a nightmare. I took several buses over to the central part of Korea yesterday and got to the bus terminal several hours early to make sure I could get a ticket.

The thing about the traffic is that because of the geography and population distribution, the traffic is usually only horrendous in one direction. At the beginning of the holiday, everyone is trying to leave Seoul and go south, so if you go north, it’s not that bad. At the end, everyone is trying to get back up north to Seoul, so it’s reversed. Luckily, we live in the south, so we can usually avoid the worst of it (I saw on the news that two nights ago in Seoul, there were hundreds of people waiting for buses and the buses were delayed up to 3-4 hours).

In any case, Chuseok for us is just a time off work, to relax, and travel, perhaps. I hope you have a happy Chuseok today as well.

Generally, in North America, we don’t think about what place names mean much. Either they’re in English (e.g. Grand Falls, Red River) or they come from French, Spanish, German, or any number of native American languages, and often very corrupted from the original language.

In Korea, however, all major place names can be written with Chinese characters, which makes it easy to look up the meaning. The notable exception to this is Seoul, which cannot be written in Chinese characters. I have made a map of Korea with the meanings of all major cities on it in English. (In case you’re wondering, the name “Korea” comes from a former kingdom called Goryeo, which means “high beauty”.)

I live in Perfect Area. (original map from es.rice.edu)