I am happy to introduce my first guest blogger ever: model, writer, and New Yorker, Susannah Bianchi. She is also the genius behind athingirl.com, a blog where she shares her experiences and adventures of living in the Big Apple, all with sparkling wit and a deep heart.

She also has a great book out: Notes From a Working Cat, the memoir of a sophisticated little feline named Maya. I would definitely recommend it. 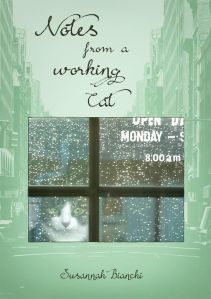 It’s not uncommon to be on the New York subway in the company of a crazy person. It’s free advertising after all, for their insanity.

Some ask for money, some just babble and I’ll admit, from years of bearing witness, I’m more than a little removed.

You often wonder, is this legit…another well-honed act, because despite how many times you are assaulted by the unexpected pounce, you just don’t know.

There’s the man who lost everything in a fire who asks for alms in English and Spanish, but Spanish so fluent you wonder why he can’t get a job at the embassy.

We have another fellow on the 6 Train who’s been needing 18 dollars to get back home since 1993. He could have been around the world 18 times by now.

I’m a regular rider, so I see them all the time, but a tourist or visitor gets clobbered, wallets out, bills expected. 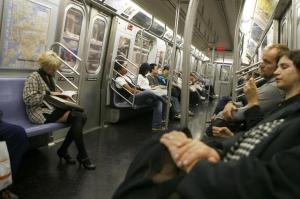 But every once in a while, a poor, legitimate soul will even get to me.

Last night on the train, coming home, a kid maybe 16 got on. He was all shriveled, like a vegetable left in the fridge too long. His right hand had that stricken fist suggesting a stroke, or some kind of permanent paralysis. His legs were puny, the right half the size of the left. What really spoke to me was his facial expression that looked as if he had been punched so hard, his face couldn’t get back to normal.

It was pain, false or otherwise, making me take an extreme pause.

He was screaming for help at the top of his lungs, his bent legs dragging him down the car. I never saw so many people so clearly affected.

He was young, like a hurt cub, and in my heart, I knew, this was not feigned.

Dollars came out like pennies from heaven shoving them in his one good hand. He said nothing as he held them, not even putting them in a safe place, as though he wasn’t even conscious of the response.

I sat there praying for him.

Suddenly my 14-hour workday felt like a grace as opposed to a grind. I remembered how I walked 30 blocks in the morning to get some exercise in…could this kid do that, let alone have a regular workday lasting that long?

I got off at the 86th Street stop to take the crosstown bus, still hearing him screech in the distance.