It Only Takes Once

(This is the first story I have posted that I  consider a “Midnight” story. Slightly more creepy than my other stuff.)

There are some experiences that carve such a large hole in our lives that they affect everything from then on, for good or bad. The best defining moment of my life was when I stepped off my boat after sailing solo from New York to Cherbourg, France. The worst defining moment was shorter, but had a greater impact.

I was living in Korea, teaching English for a year for the experience of living abroad. My apartment was apparently designed by voyeurs since the only window in the bathroom led to the outside hallway. Flip the latch, slide the frosted glass window and I could have talked with my neighbors as they were coming home and as I was taking a shower. Needless to say, I never opened the window.

I got up one night around 3:00am to use the bathroom. I’m not normally skittish, but that night, I kept looking behind me.

The motion-sensor light in the hall came on—one of my neighbors coming in late, most likely drunk. I didn’t hear any doors open and a few seconds later, the light went off. I was just washing my hands when I glanced up at the window and saw a hand pressed against the glass.

The fingers were long and thin and the whole hand had a greenish-grey tinge to it. It was pulsing slightly—stroking at the frosted glass window with its fingertips and wherever it touched, it left greenish smudges on the glass.

My heart started to pound and I backed out of the bathroom. I wanted to look away, but I couldn’t. The hand slowly slid down the glass and out of sight until all that was left were five long smears.

I was not near the living room light switch but I reached into the bedroom and turned on the light there. At the same time, the motion-sensor light in my small entranceway came on.

I was starting to seriously freak out. Maybe it’s just a short in the wires, I thought. I knew my outer door had been locked. The entranceway light went off, but then a second later it came back on. I saw a shadow of something come across the light through the frosted glass windows in the closed entranceway door. The knob began to turn, silently. 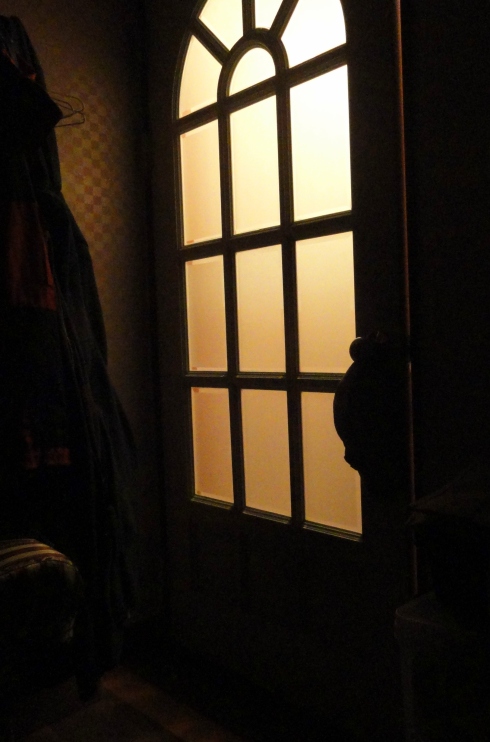 I thought I was going to pass out from panic. I had nothing close by to use as a weapon. In a second, the entranceway door would open.

I wasn’t a Christian at that time, and I had no idea where that came from. It just came into my head, suddenly.

But it never came back on. The waiting became unbearable. I had no idea if the person was gone or if they were lurking there in my entranceway, not moving and not triggering the light. An hour went by before I got up the nerve to venture out and turn the living room light on. From its light, I could tell that the entranceway was empty. I opened the door and saw that my front door was open too.

There were many things I could not explain. I swear that I had locked my front door—I did so automatically whenever I came home. The outer door was big and creaky, but I never heard a sound. The entranceway was covered with bits of dust and tiny clots of greenish-grey dirt. The strangest thing—and what made me shiver in terror—was the sight of one of my steel-toed boots, crushed almost flat and covered with green dust. I could not imagine what could have done that, and silently too.

I have never seen anything like that since, but once was enough. I could not sleep in that apartment again. I slept in a hotel for two weeks until my school arranged for a new apartment for me, one with a pass code to get into the building. I would have thought it was all a horrible dream except for the dirt and the filthy smears on the window that were still there the next day.

Since that time, I have never had an apartment on the ground floor or one where the windows were at all accessible from outside. Still, whenever it is dark and I catch a glimpse of a window, I shudder to think of another hand pressed again it, smearing it with green-grey filth, or even worse…

I am a writer of anything quirky and weird. I love most genres of fiction and in each there are stories that I would consider "my kind of story". END_OF_DOCUMENT_TOKEN_TO_BE_REPLACED
This entry was posted on Monday, July 9th, 2012 at 12:07 am and tagged with apartment, creepy, fiction, horror, mystery, scary, stalker, window and posted in Dark. You can follow any responses to this entry through the RSS 2.0 feed.
« The Woman in Blue, Part 3 of 3
Crane Game Wife »

14 responses to “It Only Takes Once”