Innocence of the Swarm

(This is not a metaphor for anything. It simply is what it is.) 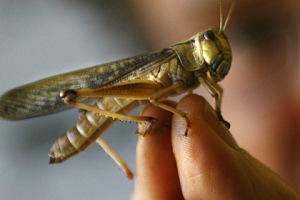 Jeremy reached up and plucked a locust out of the air and held it between two fingers. The swarm was coming, the news said. The main body was only a mile off, maybe less. It was consuming everything in its path, destroying the food of thousands in a single day. It was unstoppable.

He looked at the single locust he held between his fingers. It was struggling to get free. Of course, what creature wouldn’t try to free itself? This single locust knew nothing about the swarm. It had hatched and now it was hungry, so it was eating. It ate so little that the amount would never even be noticed, if it were by itself.

It was innocent, he realized. It had no malicious instincts, no evil plans for the misery of others. It wanted what every other creature wanted: to eat and to reproduce. To live.

Even killing it would make no difference. The absence of this single insect would not help anything one whit. It was insignificant and innocent, and yet . . .

“Jeremy, come help me get the barn closed up,” his wife called.

“Coming.” He crushed the locust between his fingers and threw its body on the ground. 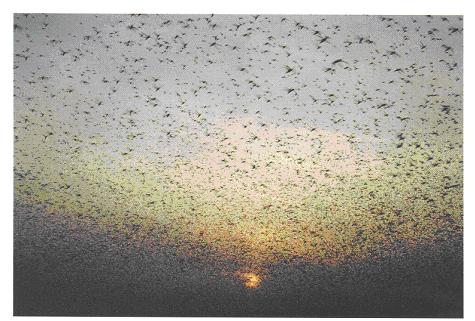 I am a writer of anything quirky and weird. I love most genres of fiction and in each there are stories that I would consider "my kind of story". END_OF_DOCUMENT_TOKEN_TO_BE_REPLACED
This entry was posted on Wednesday, September 19th, 2012 at 10:22 pm and tagged with fiction, locust, mid-week flash, swarm and posted in Dusk. You can follow any responses to this entry through the RSS 2.0 feed.
« Open Prompts #2
Saturday, 4am »

7 responses to “Innocence of the Swarm”