As you probably know if you saw my Sunday post, I was away last week on  a trip. I went by myself to a couple of small islands in the southwest of Korea, called Heuksando (흑산도) and Hongdo (홍도). They’re part of a national park, which is not surprising, considering all the natural beauty there. As promised, here are some pictures I took there. It’s very visual, although not fiction; it’s a travelogue, and actually was pretty fantastic. Enjoy~

I left here on Sunday and went down to the port city of Mokpo. The next day I took this ferry. It was very fast and the water was very rough, making it fun for me, until other people starting getting sick and throwing up. The guy behind me kept saying, “I’m dying. I’m dying. I want to live. I should have gotten off at the last island.”

On the first island, I took a bus around the island on a road that wound up and down mountains on hairpin turns and steep grades. Between the cliffs and mountains, were tiny, idyllic coves with fishing villages.

Here is one of the roads. This one is famous on the island and has twelves switchbacks in a row. It was quite something going up this in a bus. 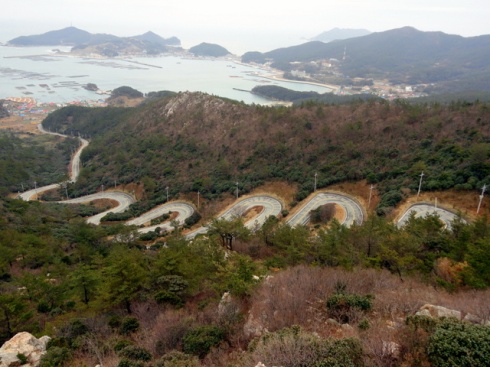 The next day, it was crazy windy so I walked along the beach to see the waves crashing up on the rocks.

After a while, I hiked back inland, through the forest and through pastures. I came across a lot of cow dung, but only 4 cows the whole time. This was a bull, a cow and a calf. The calf was very cute, but I didn’t want to get close, since the cow kept bellowing at me, even when I was out of sight.

The forest on the island was almost all broad-leaf evergreens and there were vines and ivy everywhere. It is much different from the rest of Korea.

This is a view of the harbor looking back across the peninsula where I was hiking. I could easily have stayed there for a long time. It was so peaceful. 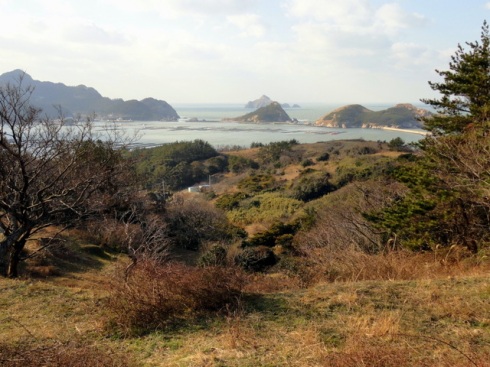 At sunset, I went back to the harbor where my motel was. It was the off-season for tourism, so I think I was the only one in the hotel. I never ate at a restaurant with any other customers; just the owners eating their supper. 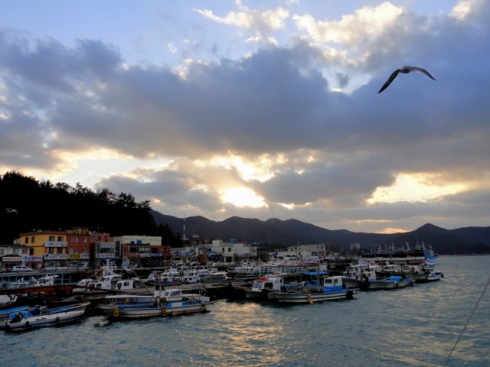 Then I climbed up the hill behind my hotel, where I was rewarded with this view:

The next day, I took a ferry thirty minutes to the island of Hongdo, which has some of the best craggy rock formations I’ve seen. Just like on Heuksando, I was one of the only tourists there.

I climbed up the mountain and had a beautiful overview of the whole southern half of the island.

The only problem with this island was that it was quite inaccessible. A lot of cliffs, like the one below, were off-limits, with no trails or safe ways to get to them. Which is too bad, since I would really liked to climb up on some of them.

The day was absolutely beautiful. As opposed to the previous cloudy and windy days, this day was sunny, warm, and serene.

I found a hotel, then struck out to the south side of the island and fought my way through the forest of vines and thorns down to a small beach. This island was just offshore from there.

A lot of where I walked was quite close to the edges of cliffs that plunged more than a hundred feet straight down to the ocean. I was careful, of course, but I’m sure my wife would have had a heart attack if she’d seen me.

Hongdo is much smaller than Heuksando and everyone lives in one village in the middle of the island. Probably half the buildings are hotels or restaurants, the vast majority of which were closed for the season. Here is a shot of the harbor as I was coming back in late afternoon. 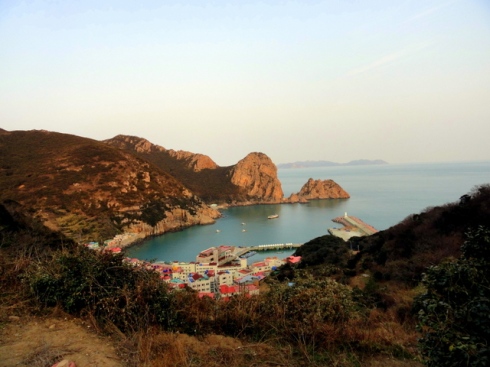 I walked down to a dock on the far side of the island to see the sun set behind the island.

The next day I got up way too early for the ferry, so I went down to the harbor and watched the sunrise.

Then it just better and better as I waited. 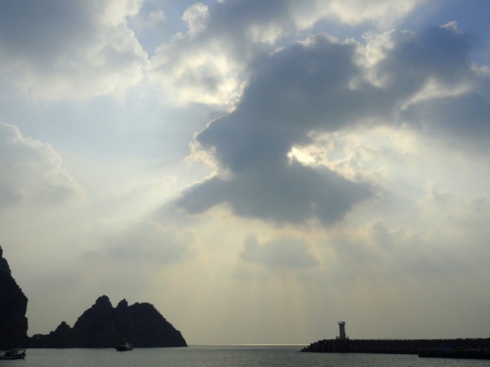 I hope you enjoyed the tour. Now that I’m back, I am slowly climbing the long, winding steps up into the Green-walled Tower to see what other fantastic worlds I can spy. More fiction coming up tomorrow.

P.S. Bonus points if you can name the reference in the title. It doesn’t count if you’re related to me, since I KNOW you know. 🙂

I am a writer of anything quirky and weird. I love most genres of fiction and in each there are stories that I would consider "my kind of story". END_OF_DOCUMENT_TOKEN_TO_BE_REPLACED
This entry was posted on Tuesday, February 26th, 2013 at 1:45 pm and tagged with cliffs, ferry, Heuksando, hiking, Hongdo, island, Korea, mountains, ocean, outside the tower, photograph, sunrise, sunset, travel, travelogue and posted in Uncategorized. You can follow any responses to this entry through the RSS 2.0 feed.
« Where I sat and wrote – Visual Fiction #20
Ichiban the Great – Friday Fictioneers »