Sometimes you have some amazing adventures you just have to tell everyone about. Read the rest of this account here. From now on, I’m going to include a short synopsis at the beginning for those who haven’t read the previous episodes and don’t have the time. Skip it if you know the story.

Synopsis: I was hiking in the mountains of Korea when I got lost at night and came out in a strange valley. I met a young woman sweeping a stone circle. She was friendly but then she and some other women locked me in a room; for my safety, I found out later. That night I heard weird sounds and noises coming from the woods. I escaped into the forest and saw a creepy woman standing on the stone circle. She mesmerized me and I went over to her. She couldn’t speak my language, but brought me to a building with a golden dome and showed me a map of the area, which wasn’t Korea. That scared me and I managed to get away. I met up with the young woman I had first met and through Chinese characters, we were able to communicate. Her name was Ain-Mai and her brother was Sing-ga. The creepy woman was named Hengfel and came from another world. She came there to eat a certain fruit called gaan-shi and also kidnapped all the men she found, which was why they hid when she came. The brother and sister tried to help me escape but Hengfel’s guards overtook us in the woods and captured us.

The woman known as Hengfel walked towards me, smiling in triumph. She ignored Ain-Mai and Sing-ga and came right up to me. She said something to me, very slowly and deliberately, enunciating every word. Of course, I didn’t understand any of it, but I replied, very slowly, “You’re a hideous old crone, who walks like an arthritic baboon.” It was childish and it wasn’t true, but I also knew she couldn’t understand me. I was about to keep going when she slapped me and walked away. I guess my tone was clear enough.

They sat us down together at the edge of the clearing, surrounded by four guards. The other two—Ain-Mai and Sing-ga—looked dull and defeated, but I wasn’t going to give up yet. If I could get away into the woods—even with restraints on my hands—I could still make it up the valley by nightfall. I hadn’t really looked at the guards closely before. The night before, it had been dark and when they grabbed us, I didn’t really have time, but now that I looked at them, I saw they were different from the other women I had seen. They were definitely female, but muscular and very serious. They weren’t paying attention to me; just staring straight ahead.

I inched my way backwards, and then in a moment of breathless apprehension, stood up slowly. Still, they didn’t notice me. I looked down to see Ain-Mai looking up at me, a tragic expression on her face. I motioned with my head for them to come with me, but she just looked back at the ground.

Well, I was going. I took two steps before my foot cracked a dead twig on the ground. Then I was off, running for all I was worth, not looking back. As long as I could lose them in the woods, I could make my way back up to the ridge.

I had gone about 200 feet when a guard appeared among the trees just ahead of me.

You got to be kidding me! She has guards out this far? I thought.

I changed direction , but another one appeared in front of me there as well, pointing her spear at me. I tried another direction, but the same thing happened. I stopped and the guard stepped back into the trees. A moment later, I felt a spear point in my back. It was the same guard and with an impassive expression, she led me back to the clearing. Sure enough, there were only three guards there now. But how could they be so fast? Unless it was just an illusion. We got back to the tree where the other two were and the guard suddenly hit the back of my legs with her spear, knocking me flat on my back.

I wasn’t ready to give up, but the hopelessness of the situation began to dawn on me. Two of the four guards remained facing us with their spears leveled. So instead, I watched the activity in the clearing. Women from the fortress village were bringing baskets of the yellow gaan-shi fruit and putting them next to the stone circle. Hengfel wasn’t in sight, but she appeared as the sun was setting.

The guards got us on our feet and moved us closer. I started to get a feeling of apprehension deep in my stomach and all I could think of was what Ain-Mai had said about them taking men and them not coming back. I was getting frantic to get back home. I thought of my wife back in Jeonju, not even knowing that there was a problem yet. My plan had been to go for six days and although I usually called every day, she would just assume I was out of range or that my battery had died. I had left my phone back with my backpack and I wondered if she had called. 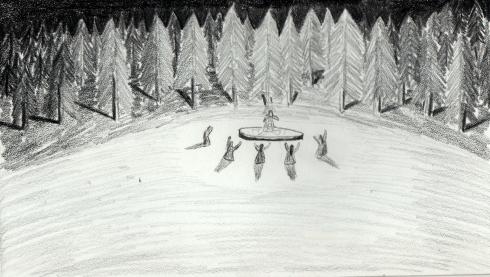 Hengfel stepped onto the stone circle. The clearing had darkened and I could barely see her, until a glow started to form around her. It grew stronger until it lit up the whole clearing and cast strong shadows. A pillar of white light formed around her and she held her hand straight up. I saw that she was holding a medallion, with a complicated, snaky pattern on it. Ball lightning formed on the medallion and shot out into the forest. A sound like a scream began to build to an ear-splitting pitch. My hands were bound in the front and I put my fingers in my ears. I saw that the women from the town were doing the same. The guards and Hengfel herself seemed unaffected.

The scream built into a high, shuddering roar. The light seemed to thicken, however that’s possible, until it enveloped Hengfel. Then she was just gone, just like that.

The guards nudged us forward.

As I looked at the column of pure light and felt the sound reverberate inside my body, I felt like I was approaching a guillotine. Sing-ga finally found his spirit. He sprinted to one side, but it was far too late for that. A spear shaft caught him on the side of the head and he crashed to the ground. One of the guards stooped and picked him up with one arm and motioned for us to follow. Watching a woman carry a stunned man in one arm like a rag-doll gave me a very strange feeling inside. I looked over at Ain-Mai and saw that she looked terrified.

A spear jabbed me in the back, going through my fleece and breaking the skin. I lurched forward, staying just in front of the spear until I climbed slowly onto the stone platform. Light surrounded us, taking us into itself, until the rest of the world disappeared.

I am a writer of anything quirky and weird. I love most genres of fiction and in each there are stories that I would consider "my kind of story". END_OF_DOCUMENT_TOKEN_TO_BE_REPLACED
This entry was posted on Monday, March 4th, 2013 at 3:59 pm and tagged with capture, escape, Fantastic Travelogue, fantasy, fiction, fortress, Korea, old woman, other worlds, travelogue, woman and posted in Travelogue. You can follow any responses to this entry through the RSS 2.0 feed.
« Mirror Ball – Visual Fiction #21
The Foreigner Card: Privilege Through Ignorance »