I was tagged in this by Ritika Upadhyay at LeBlog and thought it was intriguing so I decided to pass it on. 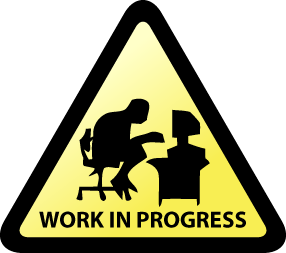 1. What is the title of your book/WIP?

This is tricky for me, since I currently have 5 novels I’m editing, although none I’m writing a first draft of. Still, I’ll do the one I’m actually working on at the moment. The title of that one is The Inner Darkness.

2. Where did the idea for the WIP come from?

Almost all my novels start with a single image, either just something that pops into my head or something from a dream. This one started with the image of a light on a long finger of rock, burning in an infinite black abyss of nothingness.

3. What genre would your WIP fall under?

This is fantasy. It has elements of romance, action and comedy in it too. It is in 1st person POV, which sometimes troubles me, but I think it’s important, since it’s very much about the main characters journey and he really is a very dynamic and quirky sort of guy.

4. Which actors would you choose to play your characters in a movie rendition?

Hmm, I haven’t though about anything like that yet. The main character is gallant but also full of bravado, so maybe Robert Downey Jr. would be a good choice. The main female character…maybe Selma Hayek?

5. What is the one-sentence synopsis of your WIP?

A inveterate wanderer finds a cave where people sometimes emerge with no memory of who they are, including one young woman who changes his life.  That obviously leaves out a lot, but you get the gist.

6. Is your WIP published or represented?

It’s on the 4th draft, I think. I haven’t had much time to work on it lately because of writing my blog stories.

7. How long did it take you to write?

It was originally a Nanowrimo novel, so I wrote the rough draft in a month. However, I’ve been working on it for a few years since then.

8. What other WIPs within your genre would you compare it to?

Not sure. This has to do with traveling between worlds, which is not an uncommon theme, but I like to think I’ve put a unique spin on it.

9. Which authors inspired you to write this WIP?

No specific author has inspired this specific novel. Perhaps H.P. Lovecraft and William Hope Hodgson for their depictions of vast, dark, empty spaces. The tone of the story is nothing like either of these authors though. I like to think of it as a light and quirky take on serious matters.

10. Tell us anything else that might pique our interest in this project.

The world where this takes place is the same one that Horus Vere and Bruce Riansson are from. They are characters from previous stories I’ve posted on this blog.

One last thing… Tag, You’re It!

Here are some people that I follow who I either know are working on a long story or I suspect it. In any case, I’d be curious to know more about it and its background, if you’d like to share. If you’re working on something and I missed you, I’m sorry. I’d like to hear about yours too.

Diary of a Lost Girl

I am a writer of anything quirky and weird. I love most genres of fiction and in each there are stories that I would consider "my kind of story". END_OF_DOCUMENT_TOKEN_TO_BE_REPLACED
This entry was posted on Tuesday, March 19th, 2013 at 8:00 pm and tagged with editing, novel, WIP, work in progress, writing and posted in Uncategorized. You can follow any responses to this entry through the RSS 2.0 feed.
« Motivational Drill Sergeant
You can Bait a Fool with Water… – Friday Fictioneers »

11 responses to “Work in Progress Challenge”