The Best Franken-steak in the World

The laboratory had never looked so posh. Dr. Andrews hurried around, setting the table with gleaming cutlery and crystal. Under his breath, he hummed—to the tune of “Macho Man”—“Nobel, Nobel Prize. I’m going to win a Nobel Prize.”

An hour later, he was seated at the table with scientists and politicians from around the country. Waiters hired for the night brought in the meals, each featuring a huge steak that almost filled the plate. The gasps of surprise changed to exclamations of pleasure as they began to eat.

“I don’t know what the presentation you have for us is, Dr. Andrews,” one of them said, “but it’s going to be hard-pressed not to be upstaged by these steaks.”

“I’m glad you said that,” Dr. Andrews said with a smile, “because the presentation is the steaks. You see, I grew them myself.”

“I didn’t know you kept cows.” 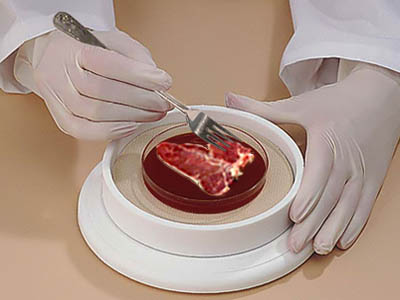 “I don’t. I grew this meat right here in the lab.” Dr. Andrews stood up and a screen lowered behind him. “I have discovered a technique for growing pure muscle tissue quickly in controlled conditions.”

There were murmurs of surprise and a few of disgust. He caught the term ‘frankenmeat’.

“Is it safe?” someone asked.

“It’s completely unaltered beef,” he said. “The genetic structure is exact. Plus, I can grow just the meat and not the fat or bones, so it is better quality, healthier, and less expensive.

“This product is superior in every way,” he continued quickly. “If we were to only eat this type of meat, there would be no need for unhygienic feed lots: did you know that the majority of all antibiotics in the United States are fed to cows? Animal rights activists would be happier, plus it would be better on the environment: cows produce a ton of methane and a lot of water and resources are used to grow corn to feed cows for beef. This meat is also much cheaper: imagine buying the steaks you just ate at the store for 50 cents a pound.”

One of the politicians spoke up. “It sounds almost perfect. The thing is, it was grown in a lab. Who exactly do you expect to eat this?”

This is speculative fiction, but I’m curious: would you buy meat grown in a lab?

I am a writer of anything quirky and weird. I love most genres of fiction and in each there are stories that I would consider "my kind of story". END_OF_DOCUMENT_TOKEN_TO_BE_REPLACED
This entry was posted on Friday, April 19th, 2013 at 7:25 pm and tagged with beef, fiction, laboratory, manufactured, meat, science fiction and posted in Light. You can follow any responses to this entry through the RSS 2.0 feed.
« Canadianized Bees – Friday Fictioneers
Unsinkable – Visual Fiction »

38 responses to “The Best Franken-steak in the World”