I know you’ve been there, so don’t even pretend you haven’t. You’re right on the edge of doing something you know you’re going to regret and if any other guy but Sammy was there, you’d just walk away, but it’s Sammy and so you don’t walk away and you end up regretting it.

At least in my case it’s Sammy; We’ve all got that one friend that we like, even though he (or she) sometimes annoy us—the one we couldn’t get rid of even if we tried. The one that makes us do crazy things, like skinny-dipping in the town’s water supply. And for some reason, you just can’t say no to him.

A few months, I was on my way to play pool with Sammy and my other friend James, who we called Jerve. We saw a Ferrari pull up to the curb ahead of us, blaring loud music. A bunch of guys got out, all slow-motion and cool-like and went into a club called The Speakeasy. 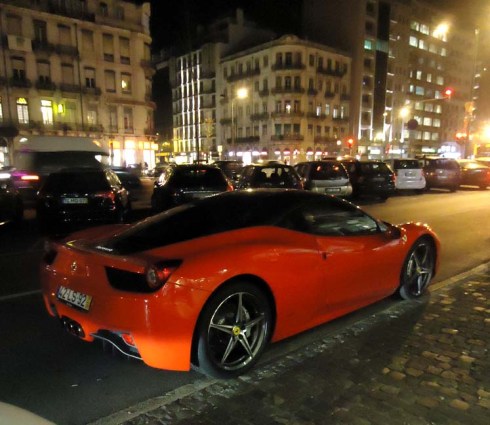 “Hey, let’s let the air out of their tires,” Sammy said.

“Are you crazy?” I asked. Sammy didn’t answer; maybe he didn’t know the answer either.

“Come on, it’ll be fun. They’re probably jerks anyway.” Then, without waiting, he sidled up to the car on the street side and started feeling around for the valve on the front wheel. “Are you coming, or not?” he whispered, and Jerve—being dumb and prone to peer pressure—went to the back wheel and crouched down.

That’s the genius of Sammy: sudden and explosive escalation of events. One moment you’re going to play pool; the next, you’re vandalizing a sports car.

“Don’t leave us hanging!” he hissed at me. I could already hear the air hissing as it came out of the tire. I hate to admit it, but I’m not very good at resisting peer pressure either, especially from Sammy.

I went over to the other side of the car, which unfortunately was facing the club and fully illuminated by the streetlights. I was just bending down to find the valve when I heard a shout from behind me.

“Hey, what do you think you’re doing?”

I straightened up. It was one of the guys from the car, looking at me in a threatening way.

Jerve stood up at that moment. “Hey guys, the air’s all out of this one.” He noticed the guy and took off running, immediately slamming into Sammy who was just standing up after emptying his tire. Jerve hit the pavement and smacked his nose, but the knowledge that we were in serious trouble picked him up and all three of us were off and sprinting away before the rest of the guys could get out of the club.

What followed was an exhausting slog of a chase. We weren’t in great shape and were puffing and wheezing before we’d gotten 100 feet. Luckily for us, the guys behind us weren’t in any better shape, so the whole chase happened very, very slowly. Sometimes we were all just walking, with Sammy, Jerve and me about two hundred feet ahead. The guys following us wouldn’t give up though and they kept yelling terrible threats and insults at us when they had enough breath.

I wanted to find a taxi, but there weren’t any in the area and I was too out of breath to call for one. We’d be staggering along for about twenty minutes and had gotten into a pretty posh neighborhood. Sammy suddenly lurched to one side and started pounding on an iron gate. The sign on the gate said it was the Honduran embassy.

“Yes?” said a voice from a speaker by the gate.

“From whom?” the voice asked.

“From the US. We’re being persecuted.”

It was more like two minutes before the gate opened. Luckily for us, our pursuers seemed to have had enough of the chase and just wanted it over with. They slowed way down until the gate opened, and then made a rush at us as we ducked inside. Then, between gasps, they yelled some perfunctory death threats and trudged back towards their car

The next few hours were rather awkward, as we met with the ambassador and Sammy tried to explain how exactly we were being persecuted. His argument boiled down to taxes.

When Jerve found out that they spoke Spanish in Honduras, he wanted to practice all the Spanish he’d studied so hard in school. Unfortunately, all he remembered was “¿Dónde ésta la biblioteca?” He kept saying it so much that they finally took him to the house library.

It was about midnight when they finally decided we were full of it and kicked us out. Jerve really hit it off with the deputy ambassador though; they started dating after that. Apparently she really liked the library too.

Sammy chalked the whole thing up to a great night out.

I am a writer of anything quirky and weird. I love most genres of fiction and in each there are stories that I would consider "my kind of story". END_OF_DOCUMENT_TOKEN_TO_BE_REPLACED
This entry was posted on Friday, May 31st, 2013 at 11:46 pm and tagged with adventure, embassy, Ferrari, fiction, Honduras, quirky, Sammy and posted in Light. You can follow any responses to this entry through the RSS 2.0 feed.
« Special Becky – Friday Fictioneers
Cosmic Orb Weaver – Paint Doodles »