I’m not saying this is anything like Ender’s Game, but is about space and it has “game” in the title. This is a story inspired by a suggestion by Sharmishtha Basu, who suggested in the last Open Prompts story that I do a story about “a spaceship caught in a predatory spiderweb” I already had all my elements for that story, so I promised I’d write a separate story. If you’re here looking for something serious, I’m very sorry. 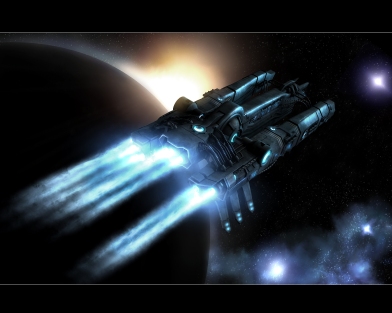 Captain Morgan let out a sigh of resignation and keyed the intercom on the starship S.S. Titmouse.

“This is your captain speaking. I have some good news and some bad news. Let’s get the bad news out of the way first. We are currently caught in the web of a space spider, from which there may be no escape. Death is not inevitable, but it’s probably a better bet than a coin toss at this point.”

He paused. In leadership training, they had always said to never give bad news by itself. Always look on the bright side; always give the troops some positive thing to take away. Good morale, above all else. He sighed again. “The good news is that we have decided to break out our supply of hazelnut coffee in the cafeteria. There’s only enough for one cup each, so whenever you have a free moment from the crisis, pop down and grab your cup.”

Commander Rambling, the executive officer, raised his head from where he was getting a massage on the side of the bridge. Daily massages for officers was part of an initiative to raise morale. “I don’t see anything on the screen. Maybe it’s gone.” 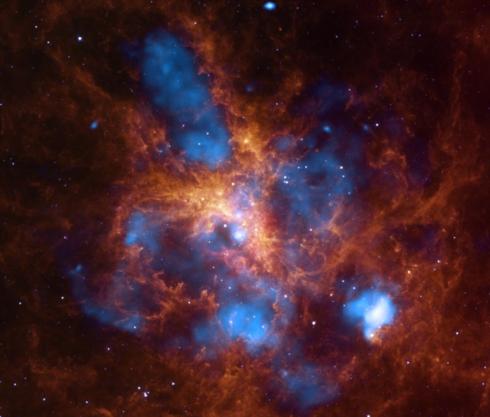 “It’s made of shadow, sir,” Hyrpees the android piped up before anyone could stop him. “It’s showing up on my sensors just fine.”

“Yeah, great. Good for you,” Morgan said. “Listen, is it really even a threat to us? Our ship is made of metal, for crab’s sake.”

“The Galactic Shadow Spider only eats metal,” Lieutenant Nimrod said from the other corner where he was reading a novel and smoking a pipe. “We’re exactly what it wants.”

“I wonder if we could sacrifice Hyrpees to it,” Morgan said. Another thing he learned in leadership training was always to look for win-win situations.

“That would be inadvisable,” Hyrpees said quickly. “I am the only one qualified to drive the ship, plus it would be bad for morale.”

“Actually, I think it would be wonderful for morale,” Morgan replied. It wasn’t just that he hated Hyrpees: everyone had hated the android since he had stepped onboard. But there were new models of androids out now. Female models and ones with adjustable personalities. With Hyrpees gone, he could apply for one.

“It would be bad for my morale, sir,” Hyrpees said.

“I can understand that, I guess,” Morgan said. “Well, what about our thrusters?”

“And the laser cannon? The gravity beam? The jaws of death?”

“He’s getting a massage, sir.”

“That might not be good,” Happylucky said. “Can you guess why?”

Happylucky sucked air through his fangs in an apprehensive manner, causing his breath to ignite. “I don’t know if that’s a good idea. Xynflyn’s race doesn’t take bad morale lightly.”

“Fine. Give him another fifteen minutes, then ask nicely.” He clicked off the video screen.

The whole ship suddenly rocked, as if it had been picked up and shaken by a colossal toddler.

“The spider has us in its claws,” Hyrpees said. “It will now start eating into our hull with its acid.”

“I recommend we use the escape pods,” Commander Rambling said. He sat up from the massage table and stretched.

“No, I can’t lose a ship,” Captain Morgan said. “Do you know what it’s like to share a name with a brand of alcohol? The pressure is incredibly high. No one cared what Lieutenant Morgan did or even Commander Morgan, but as soon as I became captain, suddenly the pressure was on. I can just see the headline: Captain Morgan steers his spaceship into a Galactic Shadow Spider web. Probably drunk. Haha.”

“But, you were drunk, sir,” Hyrpees said.

“Well, that makes it even worse, doesn’t it? I swear, if Admiral Jack Daniels hears about this . . . He will take it out of my hide.”

“Hyrpees, you’re not afraid of anything, are you?” Captain Morgan asked suddenly.

“Good. Go outside and get a sample of the spider’s acid, would you?” The android saluted and left the room. “Thank prawns,” Morgan said. “I don’t think I could have taken another moment of him.” He reached under his seat and took out a flask.

“I can still hear you, sir,” Hyrpees voice said through the intercom. “I wired my systems to the ship’s computer. I’d like to let you know that although that comment was very hurtful, I am still going to do my duty. I am now leaving the airlock.”

There was silence and then, abruptly, the ship stopped shaking. “Hyrpees, are you there?” Morgan said. “Hyrpees, come in. Do you think he’s dead?”

“We’re not that lucky,” Commander Rambling said, walking through the bridge on his way to the squash court.

A few minutes later, Hyrpees crawled onto the bridge, one leg melted off and still steaming. “I am afraid I could not get an acid sample, sir,” he said, “except for whatever is left on my leg. The spider attacked me.”

“But apparently I poisoned it. It went into convulsions immediately and floated off into space. I only had one leg left, but even so, I took the liberty of freeing us from the web while I was out there.”

“Oh really? Well, good for you. Climb back in your chair and get us out of here then.” Morgan took another quick sip from the flask and slipped it under his chair.

“Sir, I demand a citation for this,” Hyrpees said.

“With my name on it. Not just ‘that robot’ like last time.”

“Are you crazy? I’m not putting ‘Hyrpees’ on an official document.”

“No, sir. Use my full name: Hyrpees Q. Fartbender. It is a name that I have carried proudly since I was named by the fraternity Triple Omega at Stanford.”

“I think you should do it,” Lieutenant Nimrod said, closing his book and knocking out his pipe on the side of his chair. “The men would find it a great joke. It would be wonderful for morale.”

I am a writer of anything quirky and weird. I love most genres of fiction and in each there are stories that I would consider "my kind of story". END_OF_DOCUMENT_TOKEN_TO_BE_REPLACED
This entry was posted on Saturday, November 30th, 2013 at 8:12 pm and tagged with android, Captain Morgan, crisis, fiction, Johnny Walker, morale, space, space travel, spaceship, spider and posted in Light. You can follow any responses to this entry through the RSS 2.0 feed.
« The Poisoner
I’m a Little Teapot – The Nightmare »