Inspired by a true story.

May’s legs burned as she pumped the pedals of the Schwinn, laboring up Baker Hill. Her brown braids bounced on her shoulders like lengths of sweaty rope. She looked back. Nell had given up already and was pushing her bike.

“I won!” May yelled. She reached the huge oak at the top of the hill and threw her bike down. The shade was cool after the burning summer sun and a small breeze played among the leaves above her. From where she sat, the world opened up in a panorama of fields bordered with dark clumps of trees. Right below the hill was a bricked-walled yard surrounded by low buildings and impressive guard towers: Huntersville State Penitentiary. 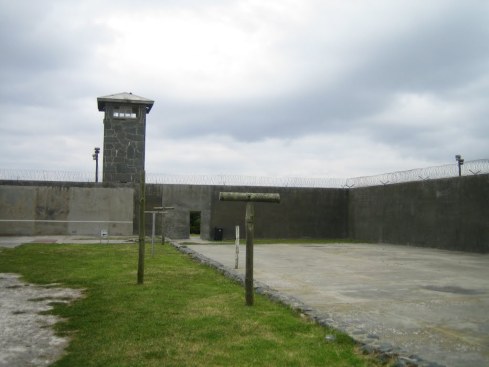 Nell reached the top of the hill and dropped her bike next to May’s. “What are they doing today?” she asked.

May looked down. “Nothing much. It’s too hot, I suppose.” The prisoners in the yard were clumped together in the shade of one of the southern guard towers.

“What do you suppose he’s doing?” Nell asked.

“That one man. He’s sitting by himself, out in the sun.” Nell pointed and through the shimmering waves of heat, May could just make out a splotch of tan and denim by the western wall.

Nell nodded, but then frowned. “But why’s he sitting in the sun? There’s surely some shade if he wanted it.”

“Perhaps he’s Mexican,” May said. “Down there it’s hotter than blazes this time of year. I’ll bet this is nothing to him. The shade is probably too cold.”

“And that’s why he doesn’t have any friends. He only speaks Spanish and so he can’t say hello to the others.”

“If he’s Mexican, what’s he doing up here?” May asked. “Maybe he’s a migrant worker.”

They sat for a while, watching the prisoners and enjoying the breeze that drew the sweat from their necks, leaving only a delicious coolness.

“What do you think his name is?” Nell asked.

“Pablo,” May said. It was the only Mexican name she knew, the name of a boy in her first grade class.

“What do you think he did?”

“He stole a diamond ring,” May said. She waved away Nell’s shocked expression. “No, it was really supposed to be his anyway. He loves a woman in Mexico and was up here working to save money to marry her. He saved up for a diamond ring, paying the jeweler a bit every month for it. But the jeweler was crooked and when he went to get the ring, the jeweler pretended he didn’t know anything about it. Pablo went to the police but he was Mexican and they didn’t believe him. So, he broke in and stole the ring that was really his. For love, you know. But the police caught him and now he’s in there.”

Nell stared at her. “How do you know all that?”

When she got home, May asked her mother for a Mexican woman’s name and soon the ill-fated love story of Pablo and Maria was firmly implanted in her mind.

After school started, May stopped going up Baker Hill as frequently, but still she never forgot about Pablo. Finally, when the weather turned colder, she took half the money out of her piggy bank and bought a pair of mittens and a wool hat at the general store. She did not want to tell her parents, but one day after school, when Nell had to stay late, May walked with slow steps and a pounding heart to the prison.

“And what can I do for you?” the guard at the door asked, not unkindly.

“I want to give these to one of the prisoners,” May said. She held up the hat and mittens. Her hands trembled.

“Pablo?” The guard wrinkled his brow and May realized suddenly that she had made up that name; she didn’t know his real name at all.

“I—I don’t know his name. He sits by himself in the yard all the time, away from the others.”

The guard frowned. “You mean Oscar? How do you know him?”

May wanted to run away from the guard and his uncomfortable questions. “Please just give him this,” she said and thrusting the package into the guard’s hands, she turned and ran.

The next day, May rode alone to Baker Hill. The weather was chilly and the fall wind charged up the hill, rustling the oak tree’s yellowing leaves fiercely. The prisoners below were crowded against the western wall of the exercise yard to stay out of the wind. She saw Pablo—Oscar—standing by himself and with a burst of happiness, she saw he was wearing the dark green hat and mittens she had bought.

As she stood there, looking down, Oscar raised his arm and waved. It had to be at her, there was no one else around. Thank you, he seemed to say. She waved back. You’re welcome.

As she rode home, her mind was a bubbling pot of thoughts and emotions. The story of Pablo and Maria was gone, but then again, it had never been true. But Oscar was real and he had accepted her gift. She was happy.

I am a writer of anything quirky and weird. I love most genres of fiction and in each there are stories that I would consider "my kind of story". END_OF_DOCUMENT_TOKEN_TO_BE_REPLACED
This entry was posted on Monday, September 22nd, 2014 at 6:01 pm and tagged with fiction, girl, hill, prison, prisoner and posted in Dusk. You can follow any responses to this entry through the RSS 2.0 feed.
« Salt Flats Terror – Friday Fictioneers
Code Red – Friday Fictioneers »