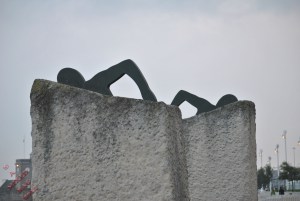 I woke up late, of course. I swear that nothing short of Ragnorak could get me up on time. I have seven alarms, all set in sequence, with increasing volumes. It wakes up the deaf guy three houses down, but not me.

The clock said 7:45 when my brain finally decided to allow my eyelids to open. The sickeningly familiar jolt of adrenaline got me out of bed and into the shower before I even realized I was awake. Ten minutes later, I was out the door, briefcase in one hand, bagel in the other, sprinting for the bus stop.

I couldn’t miss the bus. If I missed the bus, I’d be late for work again, and if I was late again, I’d get fired and if I got fired . . . a dark web of consequences fractalled out in front of me. Can’t miss the bus.

I was 100 meters away when I saw it. “No!” I screamed in impotent rage, like a weaponless berserker. It passed me, not slowing. I threw the bagel at it. No effect. I threw my briefcase, which bounced off the fender. No effect.

An open patch of wet concrete was in my way and I tripped and landed headfirst in it. As I floundered through it, I saw the bus about to disappear around the corner. “Stop, you filthy—” I screamed, adding an arcane racial epithet for Belgians which was both uncharacteristic for me and totally unexpected.

The bus stopped. The driver stepped out. I could tell by the look in his eyes that his ancestors were Belgian.

The door was locked. It was Saturday.

I am a writer of anything quirky and weird. I love most genres of fiction and in each there are stories that I would consider "my kind of story". END_OF_DOCUMENT_TOKEN_TO_BE_REPLACED
This entry was posted on Sunday, October 5th, 2014 at 11:22 pm and tagged with Alastair's Photo Fiction, bus, fiction, flash fiction, funny, morning, routine and posted in Light. You can follow any responses to this entry through the RSS 2.0 feed.
« Indefinable Allure – Friday Fictioneers
When Life Gives you Lightning »

26 responses to “Describe Your Typical Day”