As you may know, I am an English teacher. This last month, our university was host to a group of students and professional from Mexico, as part of the Proyecta 100,000 program. They are gone back home now, I am very sad to say, but while they were here, I was their writing teacher. Among the projects we did were short stories. I asked if I could post them on my blog and they agreed. So here is the first one, Shades in the Dark, written by Frank Soria and Jorge Montesinos. 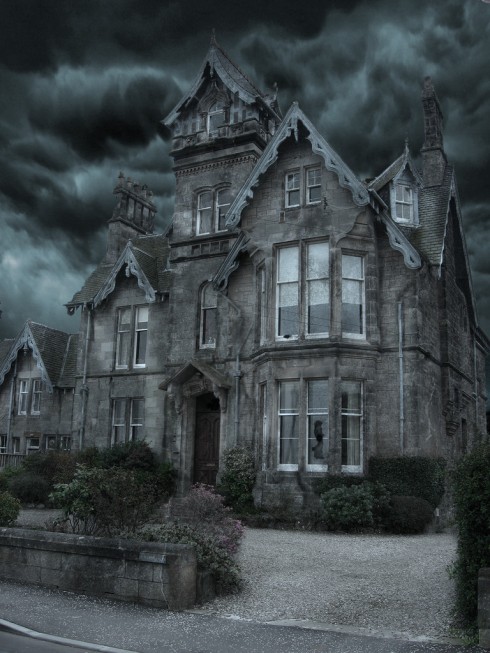 by Frank Soria and Jorge Montesinos

It was an October night full of stars, and the moon shone in the high clear sky. There was nobody but the wind blowing outside. Deserted streets seemed to be aware that something unexpected was coming up. Everything was quiet, warm, and cozy. Emily and Kevin had just gotten to their grandpa’s home. He was an old fashioned man, rough of character, but lovely deep in his heart.

The first days passed harmoniously, soft, and warm. One night after having dinner, Kevin heard a slight creaking noise coming from the corridor. Without notice he stood up and went through it to realize no one was there. He felt how the temperature in the room dropped drastically. His legs trembled as he walked away. He was almost voiceless, nobody seemed to be there, but the whisper of a strange entity surrounded his little body, taking him to his deepest scary feelings. The lamp in the corridor flickered, announcing the inevitable encounter with the paranormal event. His heart beat as fast as a horse in the wild field. Suddenly, he felt a hand grabbing his shoulder. His breath stopped for a moment. He turned around to realize that it was his grandpa looking at him. He told his grandpa about the noise, but he said nothing about it.

The following day his sister teased him about the ghost story, laughing at him. Kevin cried for her madness. Night came back. A storm was announced in the papers. The lights went off. It was windy and cold outside. Grandpa took some candles from an old drawer and met the boys for dinner. Kevin was afraid and asked grandpa to take him to bed. Emily stayed for a while in the kitchen. Suddenly, she heard somebody coming to her. She turned around. No one was there, but an empty room in the shadows. She never had felt so lonely and frightened. A gust of wind opened the window blowing the candle out, pulling everything in its path towards Kevin’s room. She ran to rescue her little brother, but she couldn’t open the door. She yelled at him desperately. There was no answer. Lightning lit her frightened face when her grandpa hugged her and calmed her down. They heard a horrible roar coming from the inside of the room, but the door remained sealed. After a few minutes they could open it and Kevin was not there. The room smelled like a rare fragrance. They had a terrible feeling, but they could do nothing.

The little boy had disappeared. Not a single roar, strange sound or shadow was seen from that day on. No one mentioned a word about that event. Emily grew up there with her grandfather and sometimes she woke up thinking that was a weird nightmare and looked for Kevin but he had gone.

I am a writer of anything quirky and weird. I love most genres of fiction and in each there are stories that I would consider "my kind of story". END_OF_DOCUMENT_TOKEN_TO_BE_REPLACED
This entry was posted on Monday, June 29th, 2015 at 9:56 pm and tagged with creepy, disappearance, fantasy, fear, fiction, Frank Soria, guest blogger, Jorge Montesinos, Proyecta 100 000, scary and posted in Dark. You can follow any responses to this entry through the RSS 2.0 feed.
« Misnomer
Sacrifices to the Monster »

3 responses to “Shades in the Dark”