I Just Caucused in Iowa

If you’re an American, you’re probably sick of hearing about the Iowa caucuses already, and if you’re not American, you might have some idea of what is going on. It is the very first step in that long, tortuous road to electing the American president, and it’s also somewhat of a quadrennial sideshow.

As a rule, I’m not particularly active in politics. Actually, I have only voted twice in my life: once in Canada and once in the United States and I have always been proudly independent. But when you are in Iowa in an election year, you got to join in on the fun. So last night I attended my very first caucus.

I went to the Democratic one in order to caucus for Bernie Sanders. I don’t usually talk about politics because it can be so divisive so if you’re not a Bernie fan, let’s stay friends. Still, even though I don’t agree with him 100% on everything, I agree with his ideas a lot more than the other candidates, he is very intelligent, and he really cares about people.

Anyway, back to last night. Here’s what happened. The doors closed at 7:00, so I went up to the campus around 6:30 and filled out the paperwork. Our township was the biggest of the ones there, so they put us in our own room and we had our own caucus. The first thing they did was to elect a permanent chair and secretary for the local political party. Not many people wanted to do it, but they found a couple people to do it. Then it was time for the main event. 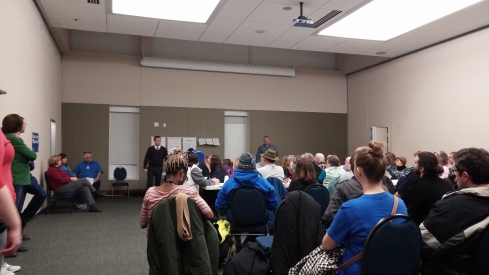 The first thing they did was count the people in the room. This is important since if any candidate has less than 15% support in a caucus, they are not considered viable. There were 86 people there so every candidate needed 13 people to be viable. Then we all got up and walked to one corner: one for Hillary Clinton, one for Bernie Sanders, one for Martin O’Malley, and one for undecided.

As it turns out, Fayette is a very Bernie place, probably because of the university. The Bernie corner spilled over into the Martin O’Malley corner, which was okay, since he didn’t have any supporters there. There were about 4 undecided people there. I think it would be fun to be undecided, since then everyone tries to be your friend and have you come to their side.

We counted off and found that there were about 55 people there for Bernie. Then the mixing up part began. I think most of the undecideds came over to Bernie, and there were cheers when one of them did. Bernie’s camp might have lost one or two to Hillary, I’m not sure. I am very curious why someone would change their support that easily. There was no shouting or arguing. I was wondering if there would be some on the Republican side, with so many candidates, but in those they just do a secret ballot.

Our township could nominate 12 delegates to the county convention, so we counted off and found that Bernie had gotten 8 of them and Hillary had gotten 4. Then we needed to elect who the delegates would actually be.

People waiting around while the delegates information was written down.

Apparently, most people don’t have much interest in getting up at 8:30 on a Saturday morning to go to the courthouse for a rubber-stamp convention. At least, it was hard to get 8 people to volunteer to do it. I said I would do it, just for the experience, so on March 12, I am going to the county courthouse to be a delegate for Bernie Sanders. From there, our county will elect delegates for the state convention, who will then elect those for the national convention in Philadelphia. I doubt they pay our way though.

And that was it, except it was not it for the caucus. Next, they had to elect members to various committees to take care of the convention, including the rather oddly named “committee on committees” who apparently made sure everything else worked okay.

Last was what they called the “Bubbling Up” time. This is where people suggested planks for the party’s platform, which would go on to the various conventions to be voted on again. All of them passed, although not all unanimously. Here is what people suggested:

All in all, it was an interesting experience. Even though the caucuses were closely scrutinized by the media and the whole country, it also had such a small-town feel, hanging out and talking with people from the town. I don’t know if I’ll ever have the chance to do it again, but I’m glad I was a part of it.

I am a writer of anything quirky and weird. I love most genres of fiction and in each there are stories that I would consider "my kind of story". END_OF_DOCUMENT_TOKEN_TO_BE_REPLACED
This entry was posted on Tuesday, February 2nd, 2016 at 10:30 pm and tagged with Bernie Sanders, caucus, Democratic, elections, Fayette, Iowa, Iowa caucus and posted in Uncategorized. You can follow any responses to this entry through the RSS 2.0 feed.
« The Office Zebra
The Marsh Garden Thief »

10 responses to “I Just Caucused in Iowa”