The Smartening of the Home

The inspiration for this story came from when I was recently reading in 1 Kings where Solomon was building the temple. He named two of the pillars Boaz and Jachin, and I realized that we name parts of our house too, the smart parts. 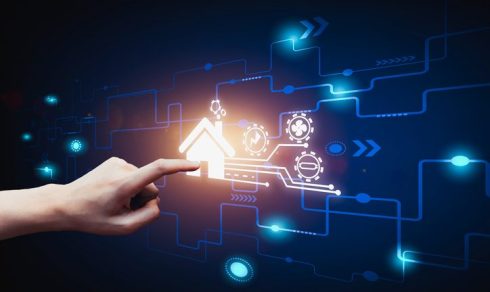 It was on the fourth day of March in the Year of Our Lord 2020 when Dan created his smart home. Devices he bought from Best Buy and Amazon and assembled in his living room. Twelve days of unpacking followed, with great tearing of tape and unwrapping of plastic wrap. The unpacking produced 3 talents[i] of Styrofoam and the user manuals stood two cubits[ii] high when stacked.

First Dan set up the living room. On a table near the router, he established the first of his Echoes. This Echo he named Mr. Cranberry, for he thought the name was funny, but he kept the wake word as Alexa. And when he called to Alexa, she did answer in a calming manner.

On the north wall of the living room, he set up the smart TV. The TV was five cubits[iii] diagonally from upper left corner to lower right corner. He proceeded to set up the Wi-Fi and when all was set, Dan spake and said, “Alexa, turn on TV.” And the TV turned on and thus did he watch Netflix.

Next, Dan set four smart bulbs in the lamps of the living room. These bulbs he named Michelangelo, Donatello, Rafael, and Leonardo. He connected these bulbs to Alexa and named the group Ninja Turtles, for he had always been a fan. Then spake Dan, “Alexa, turn on Ninja Turtles,” and the lamps turned on.

After this, Dan set a smaller Echo in the upper floor and connected it to the network. He named this Echo Porky, for he found this name funny as well.

Dan spent many more days after that setting up other rooms of the house, from the second TV in the den to the Echo Show with the screen that he set in the kitchen.

It came to pass that a week after Dan had smartened his home, the winds rose and the rain fell and a great storm came upon the house. In the middle of the night, the power flickered and then died, leaving the house in blackness.

Then Dan awoke and went to the living room. “Alexa, turn on Ninja Turtles,” he said, but Alexa did not hear and no Ninja Turtles came on. It was then that the power came on with the beeping and chirping of many devices.

“Alexa, what time is it?” spake Dan, but Alexa answered not. Instead a red light spun on top of the Echo.

Then Dan did powercycle the router and Alexa at last turned blue. “Alexa, turn on Ninja Turtles,” but no Ninja Turtles came on. Dan consulted the app upon his phone, saying, “Crap, the bulbs are all offline.” No matter how he called to them and tried to reinitialize the bulbs, no Ninja Turtle answered, for they were offline.

Then Dan in his anger deleted all the bulbs from the smart house and added them again, renaming each in its turn. Then Dan with a deep breath called out to Alexa saying, “Alexa, turn on Ninja Turtles.” And the lamps came on and again, Dan was happy.

I am a writer of anything quirky and weird. I love most genres of fiction and in each there are stories that I would consider "my kind of story". END_OF_DOCUMENT_TOKEN_TO_BE_REPLACED
This entry was posted on Sunday, March 22nd, 2020 at 7:49 pm and tagged with Alexa, Amazon, Bible, Echo, fiction, funny, humor, King James English, smart home and posted in Light. You can follow any responses to this entry through the RSS 2.0 feed.
« A Cindr-ella Story
Going the Distance »

2 responses to “The Smartening of the Home”