The Smartening of the Home

The inspiration for this story came from when I was recently reading in 1 Kings where Solomon was building the temple. He named two of the pillars Boaz and Jachin, and I realized that we name parts of our house too, the smart parts.

It was on the fourth day of March in the Year of Our Lord 2020 when Dan created his smart home. Devices he bought from Best Buy and Amazon and assembled in his living room. Twelve days of unpacking followed, with great tearing of tape and unwrapping of plastic wrap. The unpacking produced 3 talents[i] of Styrofoam and the user manuals stood two cubits[ii] high when stacked.

First Dan set up the living room. On a table near the router, he established the first of his Echoes. This Echo he named Mr. Cranberry, for he thought the name was funny, but he kept the wake word as Alexa. And when he called to Alexa, she did answer in a calming manner.

On the north wall of the living room, he set up the smart TV. The TV was five cubits[iii] diagonally from upper left corner to lower right corner. He proceeded to set up the Wi-Fi and when all was set, Dan spake and said, “Alexa, turn on TV.” And the TV turned on and thus did he watch Netflix.

Next, Dan set four smart bulbs in the lamps of the living room. These bulbs he named Michelangelo, Donatello, Rafael, and Leonardo. He connected these bulbs to Alexa and named the group Ninja Turtles, for he had always been a fan. Then spake Dan, “Alexa, turn on Ninja Turtles,” and the lamps turned on.

After this, Dan set a smaller Echo in the upper floor and connected it to the network. He named this Echo Porky, for he found this name funny as well.

Dan spent many more days after that setting up other rooms of the house, from the second TV in the den to the Echo Show with the screen that he set in the kitchen.

It came to pass that a week after Dan had smartened his home, the winds rose and the rain fell and a great storm came upon the house. In the middle of the night, the power flickered and then died, leaving the house in blackness.

Then Dan awoke and went to the living room. “Alexa, turn on Ninja Turtles,” he said, but Alexa did not hear and no Ninja Turtles came on. It was then that the power came on with the beeping and chirping of many devices.

“Alexa, what time is it?” spake Dan, but Alexa answered not. Instead a red light spun on top of the Echo.

Then Dan did powercycle the router and Alexa at last turned blue. “Alexa, turn on Ninja Turtles,” but no Ninja Turtles came on. Dan consulted the app upon his phone, saying, “Crap, the bulbs are all offline.” No matter how he called to them and tried to reinitialize the bulbs, no Ninja Turtle answered, for they were offline.

Then Dan in his anger deleted all the bulbs from the smart house and added them again, renaming each in its turn. Then Dan with a deep breath called out to Alexa saying, “Alexa, turn on Ninja Turtles.” And the lamps came on and again, Dan was happy.

My dad believed in piety by proximity. His nightstand was a stack of Bibles. My desk lamp was holy, he told me.

“It’ll keep you safe from demons,” he said.

“It’s like a cross between a deer and a lemon, I think.”

One day, I went on a field trip to the cathedral and saw a row of lamps like mine, one missing.

“Did you steal my lamp?” I asked him later.

“They have five more,” he protested.

“What about the eighth commandment?”

I suggested he read his nightstand.

If the Bible Used Clickbait

“Clickbait”, for those of you who aren’t familiar with the term, is web content that relies on sensational headlines to get people to click on it and share it. But what if the Bible used clickbait? I think it would look something like this.

Can’t Remember Ten? These Two Powerful Commandments Are All You Need!

If You Think You’re Having a Bad Day, Check Out This Woman’s Story

Whale or Fish? Either Way, This Prophet’s Story Will Blow Your Mind

8 Simple Ways to Tell If You Are Blessed!

What Kind of Fruit Does God Like? The Answer May Surprise You

Are You Living Like a Nazirite? Take Our Simple Quiz!

Undeniable Proof That Prophets of Baal Were Insane!

Before Leonidas, These 300 Kicked Some Serious Derriere

This is Like No Food Courier You’ve Ever Seen

You Will Not Believe What This Man Did For You. Click Here to Find Out!

3 Thoughts on the War on Christmas

Merry Christmas from the Green-Walled Tower! I got the ladder out and put up lights around the ivy and put a bit of mistletoe somewhere, in case the missus wanders by. I’m sitting, looking out my window at the world all lit up with lights and I notice a small point of conflict.

Apparently there is a war on Christmas. For those of you who haven’t heard this term before, it is the conflict (mostly in North America) about saying Merry Christmas versus Happy Holidays, and using religious Christmas images in public places. I’m not here to debate the details of this or to say that there isn’t a war on Christmas. I’m here to say why it doesn’t matter one way or the other. I know that this is a very charged issue for a lot of people, but please here me out.

What does Christmas mean?

I’m sure you could get a million answers to this question, ranging from “absolutely nothing” to “buying a lot of expensive crap” to “spending time with family and friends” and “celebrating the birth of Jesus”. Sure, the birth of Jesus is the original meaning of Christmas, but all of these answers are valid. I’m not saying that all of them should or shouldn’t be the meaning of Christmas, but pragmatically, they are. Christmas is a lot of things to a lot of people.

I always try to be a peacemaker and I try to see both sides of every issue. As a Christian, I understand people getting upset that Jesus, not only the reason for the holiday in the first place, but also our Savior, gets a back seat to Santa Claus a lot of times. However, for those of you who think that there is a war on Christmas, I have three thoughts.

1. The original Christmas story is unchanged

I just went and watched the second Hobbit movie a couple days ago. And while I didn’t like everything about it, it was a pretty good movie. However, even if they had really butchered it, the book The Hobbit would have remained unchanged. That is how I view Christmas. Rudolph and Santa cannot erase the Christmas story. Christmas has survived the introduction of Christmas trees, holly, and mistletoe, as well as numerous other traditions that have nothing to do with the original Christmas. Even if the word Christmas is eventually effaced from public usage and people use the term Annual Gift Exchange Day or Santamas, it still won’t affect the original meaning of Christmas, which brings me to the second point. 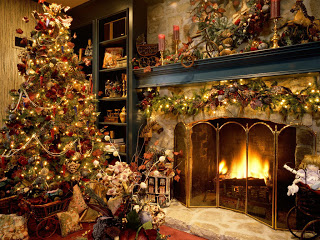 2. What matters most is how you personally celebrate Christmas

In Korea, Christians in Korea go to church most of the day and then go help poor people. This makes me a bit embarrassed since although I’m a Christian, I don’t go to church on Christmas (that’s for Christmas Eve). Christmas for me is a time for family. I wouldn’t want Koreans judging me for not going to church and so I should not judge others if they want to say Happy Holidays or  read The Night Before Christmas instead of Luke 2. Honestly, I think it’s pretty impressive that non-Christians talk and sing about Jesus as much as they do around Christmas time.

“Glory to God in the highest heaven, and on earth peace to those on whom his favor rests.” (Luke 2:14)

Merry Christmas, everyone. I hope you have a great day.

The Light of Times Past – Friday Fictioneers

This Friday Fictioneer prompt was an interesting challenge. To me, it said primitive technology in the midst of modernity. So that was the jumping off place for this story. Thank you to Rochelle Wisoff-Fields for the picture.

The Light of Times Past

“Great job, Shane. Those cybos didn’t have a prayer.”

Shane smiled and nodded. He stowed his blaster rifle, flew home, and threw the main breaker.

That time was precious—that hour he spent daily in the oil lamps’ glow, with not even a single LED breaking the spell.

Shane was proud of his job defending humanity from the cybo attacks.

He missed those days—doing homework and saying prayers by lamplight in that old wooden house, with its blue door and freezing outhouse.

He took out the old German Bible, opened the cracked cover, and began to read.