I keep meaning to write and post the Friday Fictioneers story on Wednesday, but the last few weeks have been crazy busy here. I work in international admissions at Gannon University and we have new students coming in for the October session. Next week should calm down a bit, relatively speaking.

This was the final round of Eluci-Date, the show where two contestants competed for a date with a lexicographer by creatively describing pictures. It had been called Meta-For-a-Date until it was bought by thesaurus.com.

My mind froze like a naked Floridian in Greenland.

Kristina, the lexicographer, gazed at the picture. “Lewis?”

No! She wanted a comparison.

“Smeared titanium white on the palette of creation,” Lewis said, smirking. “With a #6 fan brush.”

Kristina frowned, then grinned at me. “Why would an angel become a safecracker?”

What do you see in the picture? Let me know.

Fantastic Travelogue #3 – The Light in the Woods

Sometimes you have some amazing adventures you just have to tell everyone about. Read the rest of this account here.

The worst part about being locked up all day is not being able to go to the bathroom. This wasn’t a dank prison cell I was confined in: it was a nice parlor with polished wood floors and walls covered with a pale pink, fibrous paper. It held nowhere where a civilized person could even hope to respectfully relieve themselves. At that moment, I had just eaten as much as I wanted to of the meal and was feeling very comfortable, but I did not count on that feeling lasting.

I knocked on the door some more and tried calling, but no one answered. Finally, I sat down and looked at the signboard above the door. I had noticed it when I was eating but now I stared at it and tried to make some sense of it. It looked like Chinese, but the characters were a lot more curvy than what I was used to. From what I could tell, it meant “the fortress of the rising light” which would have been typical of the grand and lofty names of most Korean palace buildings.

Things were getting urgent in the bathroom department and finally I started pounding on the door, calling out in every language I knew just to let me out for a moment. The door opened without warning and the head woman stood in front of me, holding two fingers to her mouth. When I started to speak, she put the fingers on my lips, which shut me up quick. She evidently perceived my distress in my expression and in my stance since she made a little noise of comprehension and slammed the door in my face. The young woman I had met in the forest opened the door and put a earthenware pot on the floor along with a small basket of freshly-picked leaves. She gave me a smile and then shut the door again.

Sometimes you just gotta do what you gotta do, and I did what I had to do. The rest of the afternoon, I moped around, wishing I had a book at least. A couple times, one of the women would open the door a crack to push in a tray with water or some fruit on it. They were at least running a hospitable prison. 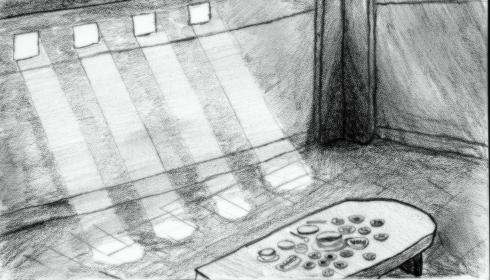 I must have dozed off because I woke up to find the room much darker. Peering through cracks in the shutters, I could tell that the sun had set outside. I could hear shouts and cries and some of them sounded male to me. The men are back, I thought, unsure if I was relieved or not.

I stuck my hand out the small window and managed to push the wooden shutter out a little. It was fastened at the bottom, but I could move it enough to see through a crack between them. There seemed to be bonfires built around the village and by the dancing red light, I could see the outline of the nearby houses and the dark wood looming up beyond them.

At that moment, a burst of white light erupted from within the forest. It coalesced into a pillar of white light that shone straight up. It’s a spotlight, I thought. It was coming from the area of the large stone ring and I realized that they must have been preparing for a concert or something there. Why they would need to lock me up to keep me out of the way, I wasn’t sure, but they had been nice enough to me besides that.

A ball of light flew away from the pillar of light and moved horizontally through the forest. Okay, that’s weird, I thought. More and more erupted and flew here and there. Some of them came over the houses and rested on the tips of the roofs. Ball lightning was the only thing I could think of. I’d never seen it, but I had heard that it acted crazy. An orb of light came towards me scuttling along the ground, but it missed the building and kept going.

A sound like a scream came from the forest. It could not have been human though, because it was constant in pitch and grew slowly in volume, until it sounded more like the roar of a jet engine. Shadows were being thrown around in the forest, as if things were dancing in front of the light pillar.

I sat down on the floor and pulled my knees up to my chest. Suddenly, I was just tired of being there. All I wanted was to go home.

All of my novels, as well as most of my short stories, have started with a single image in my mind. Pictures are powerful sources of inspiration, like creative food. I’ve decided, as a change of pace, to occasionally post some of my original photographs that seem to inspire stories in me. I won’t necessarily write any stories based on them, but if you wish to, feel free. Just let me know since I’d love to read it. 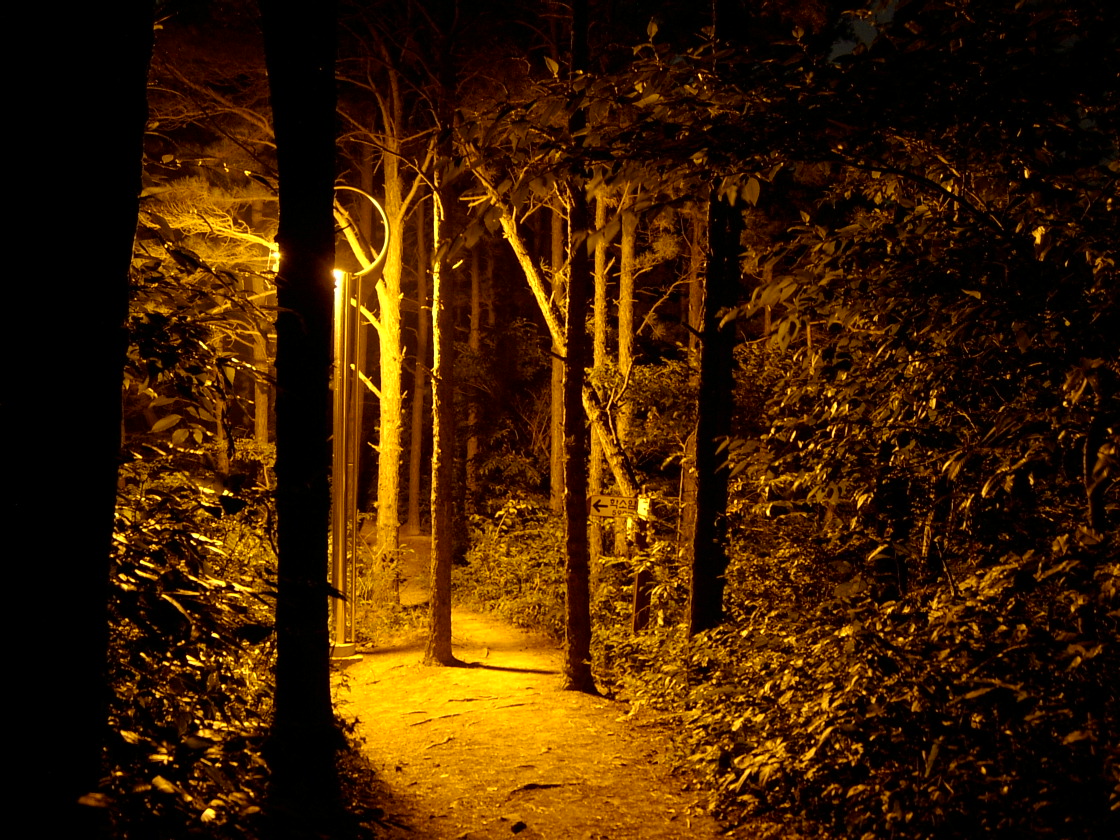