There are few ways of dying that are worse than falling into a river of lava. Molten rock is one of the hottest substances on the surface of the earth, instantly incinerating anything that touches it. Still, there are a select few for whom the extreme danger is a game. They are known as volcano jumpers: few in number, reckless in spirit, ineligible for life insurance. 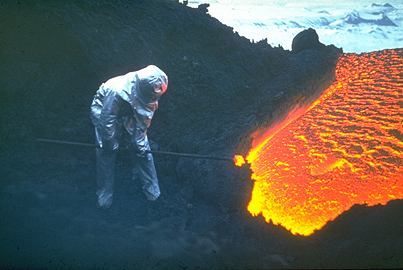 Brad concentrated on the rock ahead of him. Even wearing a heat suit, the extreme temperatures were making him lightheaded. Just feet below him, a slow river of lava bubbled and swirled lazily.

“Come on, you can make it,” his brother Donald called. They were alone in a low cave that just days before had been filled with a furious torrent of lava. Now it had subsided slightly, just enough for them to make their way along the edge.

Brad reached out with his rock hammer and then swung his leg over the crevice. Another small jump and he was across.

“Now comes the big jump,” Donald said. Brad looked ahead to where Donald was pointing. Two rocks came together over the main flow of lava, but they were still five feet apart, with nothing to grab onto.

Donald nodded. “We have to. We can’t go back from here and it’s the only way back to the surface.” He took the lead, edging out until he was on the very edge of the rock. Then he made a flying leap to the other side. His foot slipped, but he caught himself, just before it could touch the lava flow. “It’s okay,” he said. “It didn’t touch. My suit protected me. Come on, you can do it.”

Brad edged out onto the rock. Sulfurous fumes swirled up, making it hard to see. He thought of his parents, his girlfriend Jenny, his dog Freddy. If he missed this jump, he would never see any of them again. Instead, he would be burned alive in a river of fire. He jumped with all his might. He missed completely. 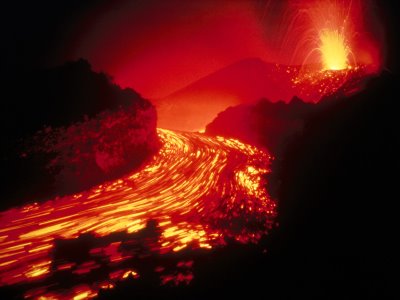 “You’re dead,” Donald said from where he stood on the armchair.

Brad picked himself off the living floor. “Move the chair closer next time,” he said.

The sawed-off broom handle in Brad’s hand ceased to be a rock hammer and became a spear gun instead. The patch of living room carpet in front of him became a patch of ominous, blue water.

I am a writer of anything quirky and weird. I love most genres of fiction and in each there are stories that I would consider "my kind of story". END_OF_DOCUMENT_TOKEN_TO_BE_REPLACED
This entry was posted on Wednesday, November 21st, 2012 at 6:09 pm and tagged with Brad and Donald, fiction, game, imagination, lava, mid-week flash, quirky, volcano and posted in Light. You can follow any responses to this entry through the RSS 2.0 feed.
« “But then…” The Beginning of an Epic Chain Story
Who am I? (and the Leibster Blog Award) »