How’s that for a glib, yet cryptic title? Let me explain a little more.

I walk into a used bookstore, which like most bibliophiles, is similar to walking into an opium den. Oh sure, you tell the people waiting in the car that you’re just running in for a moment, but they know better and wander off for some coffee, or a tour in the Peace Corps. Meanwhile, I wander through the dim shelves, looking for a stack of yellowing, dog-earred volumes to trade some hard-earned lucre for. I go to fantasy/sci-fi and start pulling books out. Hmm, this one looks interesting. Interesting title, nice cover art. I glance down at the bottom of the cover. Book 1 of—

I’m not going to say it’s a hard and fast rule, but I must confess that I am deeply biased against novel series. I’ll call it a prejudice since then I don’t have to justify it. Of course, in the above scenario of the used bookstore, the much more frustrating situation is finding Book 4 of– with no sight of Book 3, 2, or 1 anywhere. That’s not the writer’s fault, but here are some other grievances I have with book series. 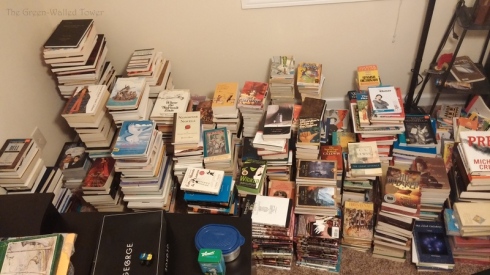 Most of our books. I’m sure some of them are series.

This doesn’t happen much, but every now and then, the volumes keep coming and coming, introducing more and more plots and characters and not wrapping up enough of the old ones. This was my complaint with Wheel of Time. Hopefully, this won’t be the case with the Game of Thrones books but that is also one reason I will probably never read them.

Let me clarify for a moment. I don’t have any problem with book series that all take place in the same world, but are separate stories, even if they are loosely related to each other. That’s fine. Books like the Discworld novels and the Chronicles of Narnia are series but they are also standalone novels, for the most part. My problem is with series that are all one single story. If the first book isn’t that good, I feel torn between giving up and never finding out the ending, and shelling out more money just to know what happened. It’s like selling me the first quarter of a novel, and unlike Jimmy Norman, the master behind Dysfunctional Literacy, I finish books. It’s a compulsion with me, even if I don’t like them (even this compulsion is more of an ideal; there are plenty of books I never finish).

3. You get the feeling the writer is only continuing the series for money.

I don’t have any specific examples of this, but I’m sure you’ve read them. There are still things that happen, conflicts occur, characters do things, but the books start to lose some of the driving force of the first one. It’s not necessarily bad writing, but you get the feeling that it’s also not really necessary.

4. The series is an artificial construct.

This is a publishing trick more than a writing one. Korea is especially bad at it, for some reason. I have the Lord of the Rings in four languages and the Korean one was by far the most expensive. That’s because while the other languages sell it in three books, the Korean version has seven volumes, meaning it’s 7/3’s more expensive. It is technically 6 books in one (plus the appendices) but there’s no point in selling it that way, except for money.

When I was young, I bought a middle grade fantasy series called Winds of Light. It had six volumes, even though each was only 130 pages or so. That was fine, except about six months after I bought the whole series, they came out with a single volume edition for about a third of the price of all six volumes. Maybe that was when my series hatred started.  Maybe I should go see a literary psychologist.

(Note: just to preemptively point out my hypocrisy, I am planning to write a novel series in about ten years or so. I only mention it now since everything online is eternal and I just know someone will dig up this post in 15 years when my serial novels are on the bestseller list. I just like to be prepared.)

Okay, I’ve ranted enough. How do you feel about serial novels? Let me know in the comments. (If, by the way, you write serial novels for a living, feel free to curse me out or send me a free sample of your books to try to sway my mind on the matter.)

I am a writer of anything quirky and weird. I love most genres of fiction and in each there are stories that I would consider "my kind of story". END_OF_DOCUMENT_TOKEN_TO_BE_REPLACED
This entry was posted on Tuesday, January 20th, 2015 at 11:42 pm and tagged with Dysfunctional Literacy, hate, list, novel, series, writing and posted in Uncategorized. You can follow any responses to this entry through the RSS 2.0 feed.
« If I Had a Penny – A Poem to My Wife
Tidings by Tide – Friday Fictioneers »