My brother Terrance would make a brilliant lawyer. For him, any agreement was a Swiss cheese of loopholes.

He once bet me $1,000 I couldn’t live in an abandoned house for a month. I’d seen Fight Club, seemed okay.

I moved into one on the outskirts of town. I had a part-time job so I made the house my project. Once I could keep out the raccoons and the rain, it was pretty nice.

Terrance refused to pay. He argued that as soon as I’d moved in, it wasn’t abandoned any longer. Like I said, a brilliant lawyer.

Brothers in the Fatherland

Brothers in the Fatherland

The guards never check the back, my brother Kurt had said.

I crouched in breathless darkness, rain Niagara Fallsing down the windows. Kurt was talking to the guard, getting me through security.

I gripped my pistol. Kurt was loyal but I knew that only a bullet in the tyrant’s head would set the nation free.

I heard a command and the van moved forward. We were in. Kurt thought this was intelligence bureau training. This would kill him.

The van doors flew open. Rifles pointed at me. “I’m sorry,” Kurt said. “It kills me to do this.”

Mark had a baby brother—for four whole days. As a three-year-old, he didn’t understand the small box at the front of the church, not big enough for him to fit in, but almost. It wasn’t until he was five that his parents explained who Jared was, his tiny brother he had never even seen.

That night, he dreamed about him. Jared would have been two, if he’d lived, but in the dream, he was running across a meadow of purple flowers, chasing Mark. Mark stopped and tackled the smaller boy in a bear hug and they fell, laughing among the flowers. He had his little brother back. Then Mark woke up.

Every night that Mark thought about Jared, he dreamed about him and as the years passed, Jared grew with him. The night before he went to college, he and Jared rode black motorcycles across a barren plain, while an impossibly large moon rose in front of them behind iron-tipped mountains. The night before his wedding, Mark dreamed about sitting in front of the church, rubbing the anticipation sweat from his palms onto his tuxedo pants. Jared sat next to him, silently.

Three years later, Mark thought about Jared right before sleep, but in the dream, he was alone, standing on a wild beach, the sea breeze blowing in his hair. Jared was gone and for the first time in a dream, Mark felt a crushing loneliness come over him, as if Jared had died again; had died for real this time. Somehow, he knew that he would never see Jared again.

Mark woke up with the morning sun glowing on the bedspread. The bathroom door opened and his wife came out. There seemed to be a glow about her too as she sat down next to him and gave him a hug. “I’m pregnant,” she whispered.

He nodded, too surprised to say anything. “It’s a boy,” he said finally.

Her eyebrows went up, along with the corners of her mouth. “Oh really? You’re sure?”

This story is neither quirky or dark, my usual themes, but you know what they say: “departure from the norm is the spice of life.”

Here are a collection of other stories around this picture. 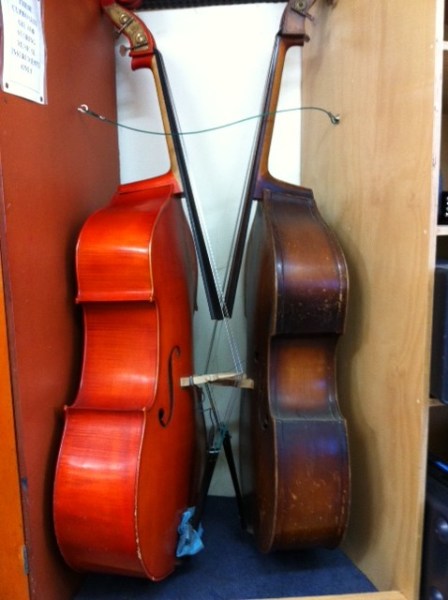 It probably would have failed anyway. Who would want to hear a double bass duo anyway? Quadruple Bass, we called ourselves.

I claimed Grandpa’s old pride-n-joy. My brother had to save up three years for his instrument. Practice breaks were filled with lofty plans of concerts, tours, autographs. He talked; I listened, smiling.

His sickness killed all that. My last performance was when I lugged both behemoths up to his third-floor hospital room and tried to play both simultaneously to make him smile.

They just sit there now, but sometimes I think I can hear them hum to each other.